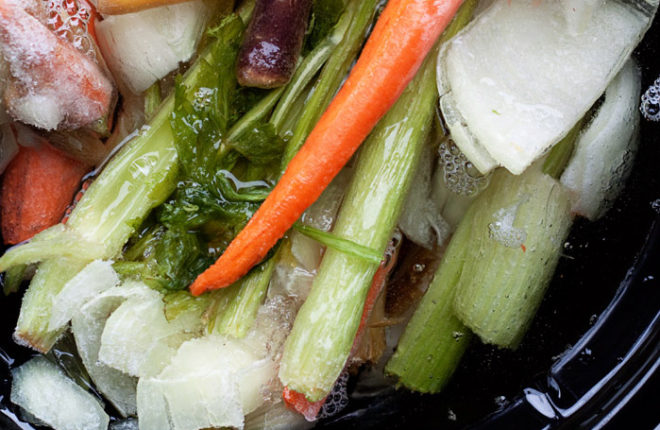 Grab your veggie scraps and your Crock Pot and make up your very own batch of golden-delicious veggie broth! It’s easy.

How to Make Vegetable Broth in the Slow Cooker 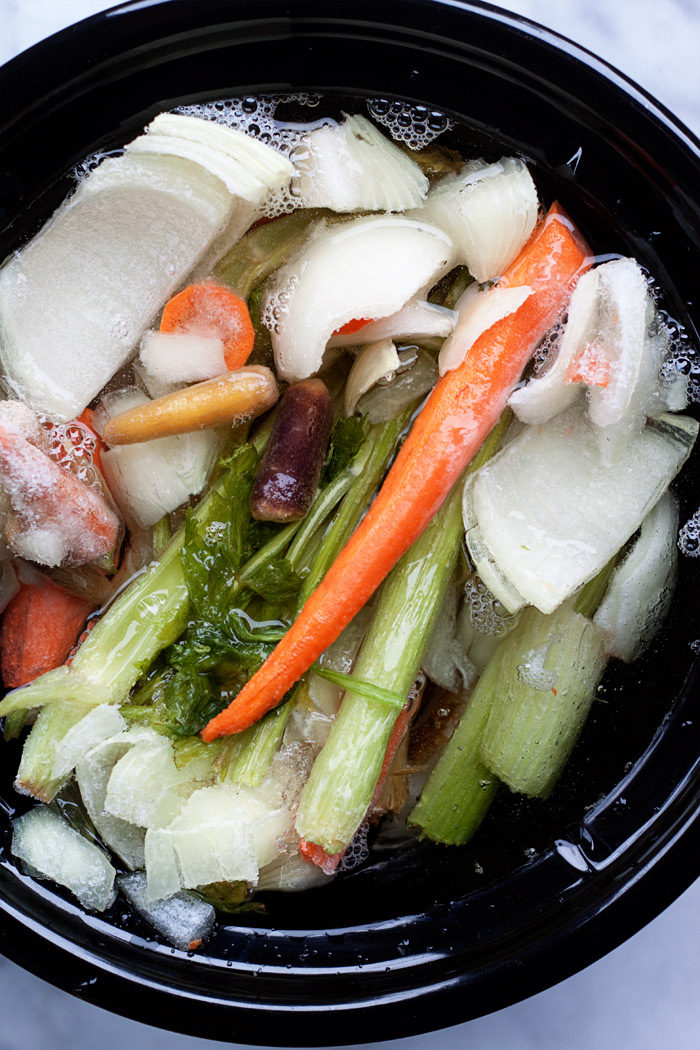 Those boxes of vegetable broth are super handy and all, but during soup and stew season, they can really make a dent in the ol’ pocketbook.

I do like to make my own vegetable broth at home (and when I do it from veggie scraps, it’s pretty much free!) I love the method I blogged about here, but it also requires a lot of stove-top time, which means I have to make it on a day when I know I’m going to be home for awhile.

I love my homemade veggie broth and I love my slow cooker. Why couldn’t the two work together for some easy hands-off cooking time? Well, as it turns out, they can! Hallelujah. 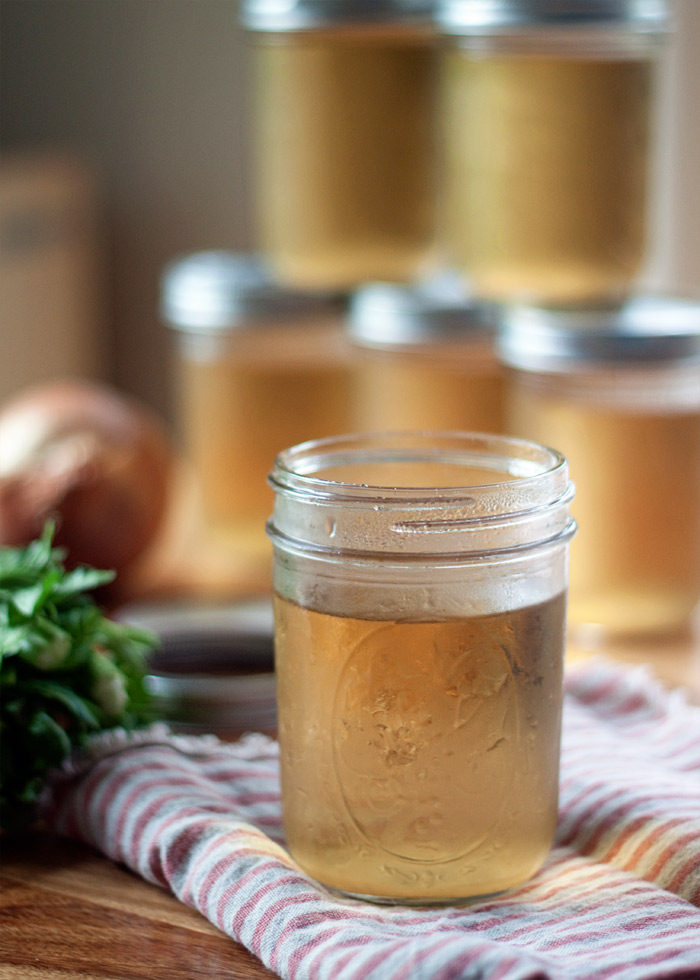 Making slow cooker vegetable broth couldn’t be easier. No, really. Here’s how to do it!

There are two ways to go about this: keep a bag for scraps in your freezer, or buy fresh veggies.

I like to keep a gallon-size bag in my freezer, and that’s where I stash clean onion skins, carrot sticks beginning to wilt, and the ends of celery. If I end up with some leftover parsley or other herbs, I might throw them in there as well. It doesn’t take long before that bag is bursting at the seams and it’s time to make some broth. 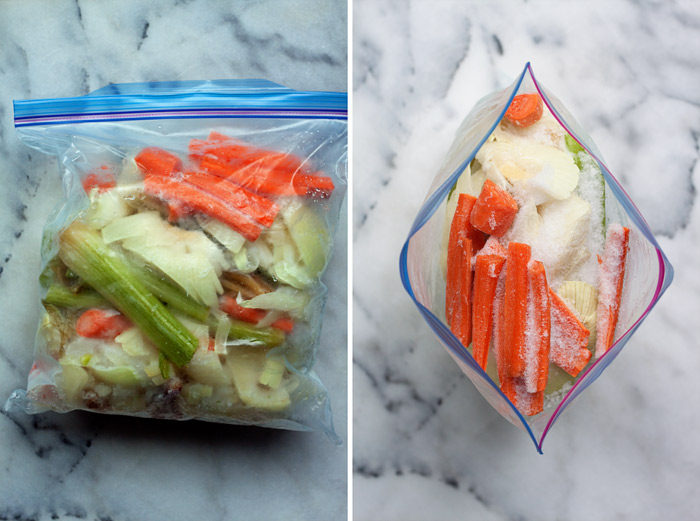 Another option is to go out and buy some carrots, celery, and onions. I find that about 1 pound of veggies = 4 cups of broth.

My freezer bag is usually about 3 pounds worth by the time it’s stuffed to the gills. So that’s a good 12 cups of broth each time I make a batch. Gotta love it.

Add veggies and water to your slow cooker. Again, we’re talking 4 cups of water per 1 pound of vegetables. If you don’t have a scale, 1 pound of carrots, onion, and celery is about 5 cups. But even if neither of these measurements are exact, no worries! This is a pretty forgiving formula.

So, veggies + water. Check. Now, throw in a few peppercorns and a couple of bay leaves and put the lid on the slow cooker.

Cook on low for 8-10 hours (or on high 4-5 hours). And leave it alone! If you keep stirring it, the slow cooker loses its heat (and your broth might get cloudy, which doesn’t necessarily affect the taste, but it’s not as pretty). 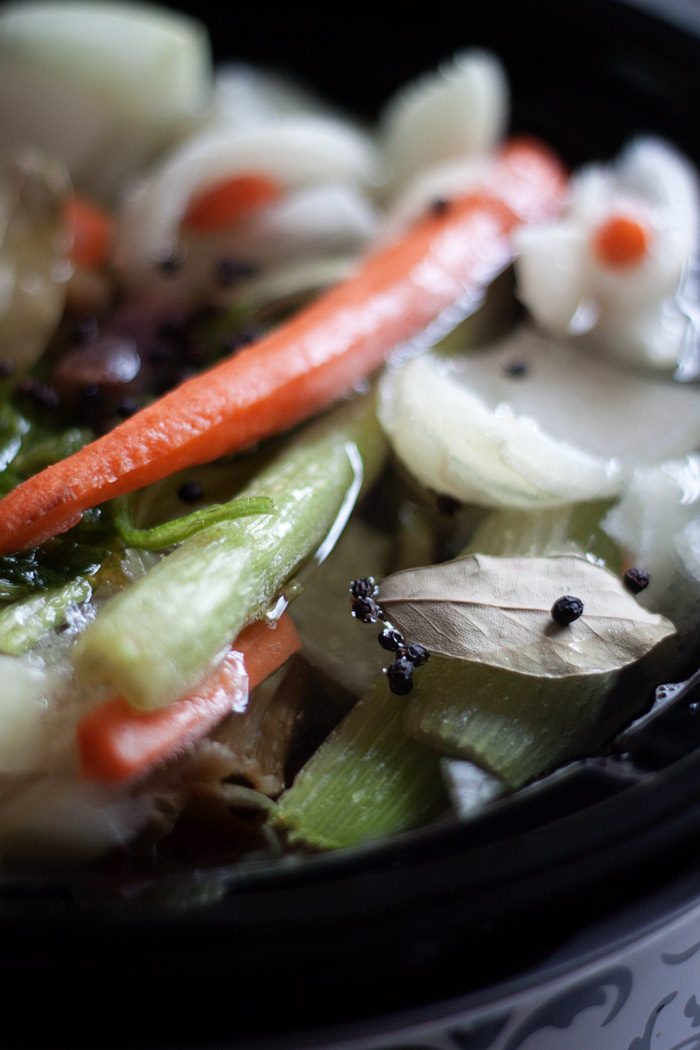 Your broth is done when it’s golden and the veggies are super tender. Remove the lid from the slow cooker and let the broth cool for a bit.

Use a wooden spoon to gently press on the veggies in the Crock Pot to release a little more flavor. And then it’s time to drain! Grab a large bowl and set a colander over the top. Make sure you’re near your kitchen sink! Now carefully pour the mixture into the colander and discard the cooked veggies. 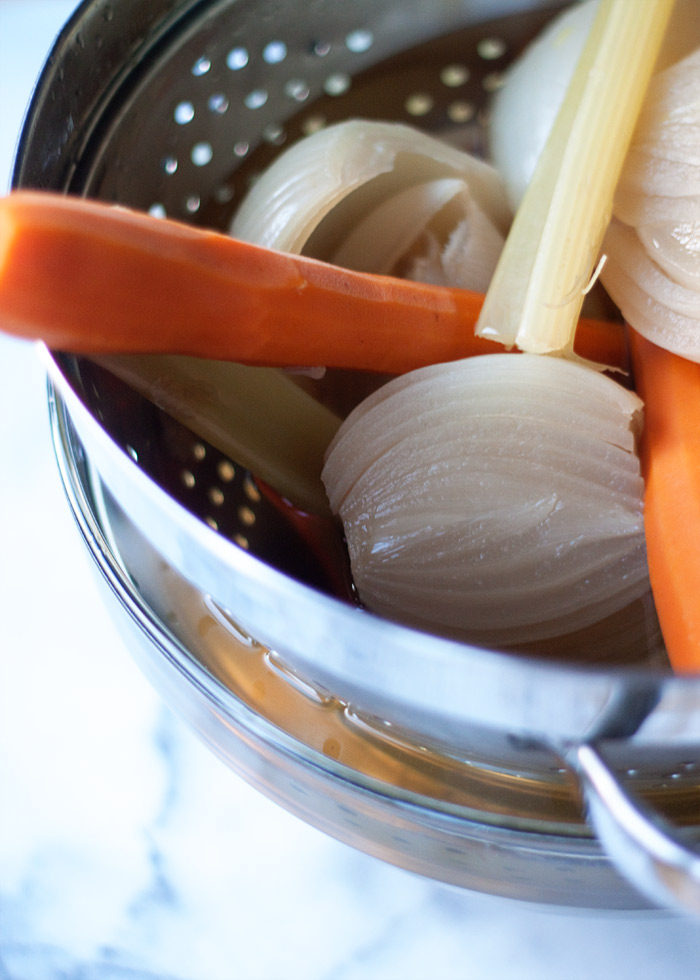 NOW set a fine-mesh sieve over another bowl (or rinse your slow cooker out to use that). And pour the broth over the sieve to get the last bit of sediment out.

Hey look at that! That’s some beautiful broth you have there. 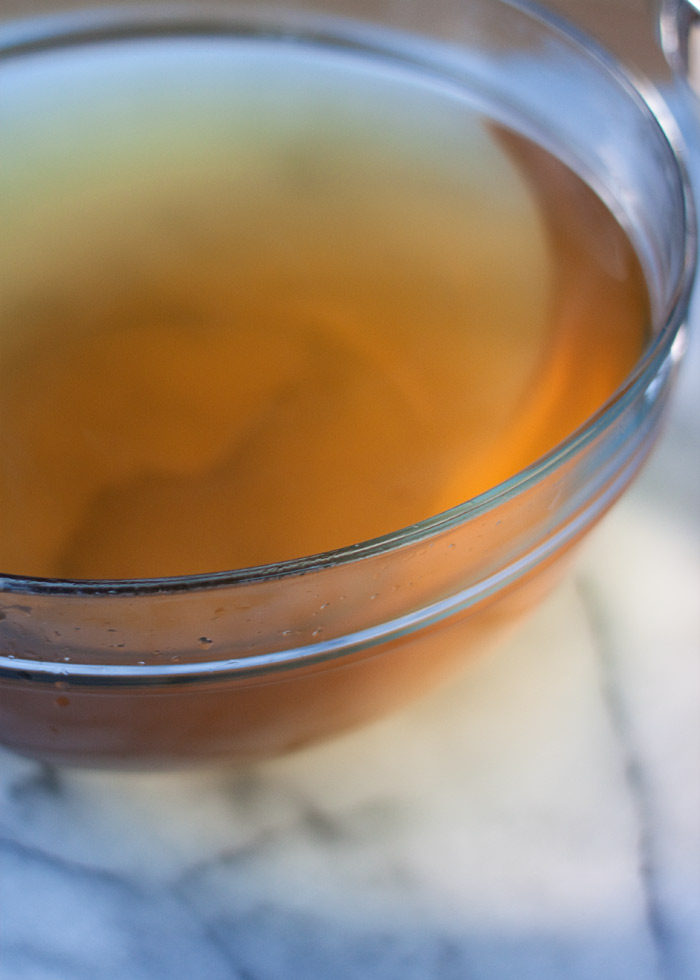 At this point, you can add some salt. If I’m adding salt, I go for about 1/2 teaspoon of kosher salt per 4 cups of broth. But usually I just leave my broth unsalted, adding salt to the recipe I’m using it in instead.

And now it’s time to store your broth! I store it in either mason jars or freezer bags, usually in 2-cup increments. It keeps for about 5 days in the fridge, for several months in the freezer.

Note that if you freeze your broth in mason jars, you should only use straight-sided jars and fill only to the fill line to allow for expansion. Otherwise, you may be looking at a cracked jar. No bueno!

To use the broth, I usually pull it out of the freezer and place it in the fridge to thaw 12-24 hours ahead of time.

When I’m desperate, I have tried to thaw broth on the stovetop or I stick the freezer bag in a bowl of hot water and I tell ya, it’s a pain. So I still do keep boxes on hand for last-minute broth needs, but I use it a lot less now. That’s still a ton of money saved! 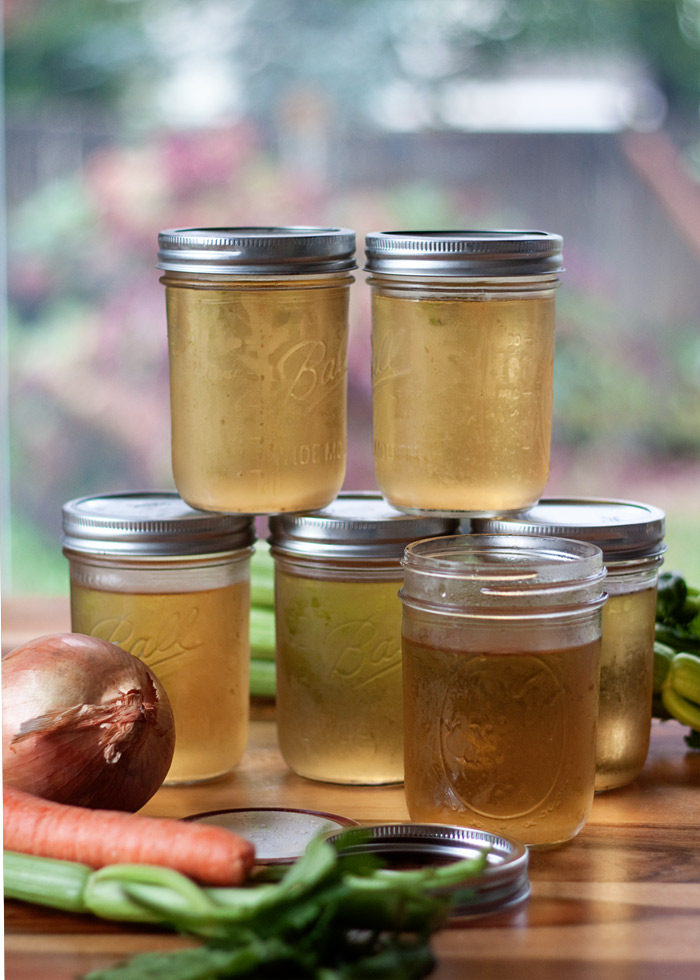 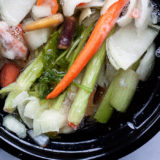 Grab your veggie scraps and your Crock Pot and make up your very own batch of golden-delicious veggie broth! It’s easy.

Note: If you’d like to make a smaller batch in a smaller slow cooker, I suggest allowing for about 2 quarts of room per 1 pound of vegetables/4 cups of water.