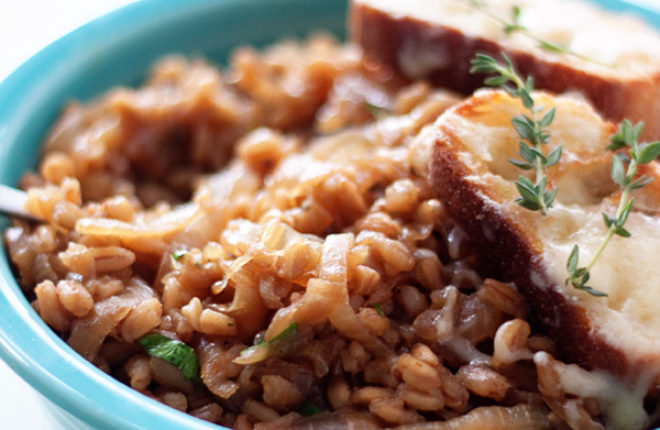 With tender-cooked farro grains and French onion flavors, this easy one-pan favorite is like a cross between risotto and French onion soup. Serve with Gruyere-topped crostini and a fresh sprig of thyme and we’re talking swoon-city. For a vegan version, just omit the gruyere – still absolutely delicious! 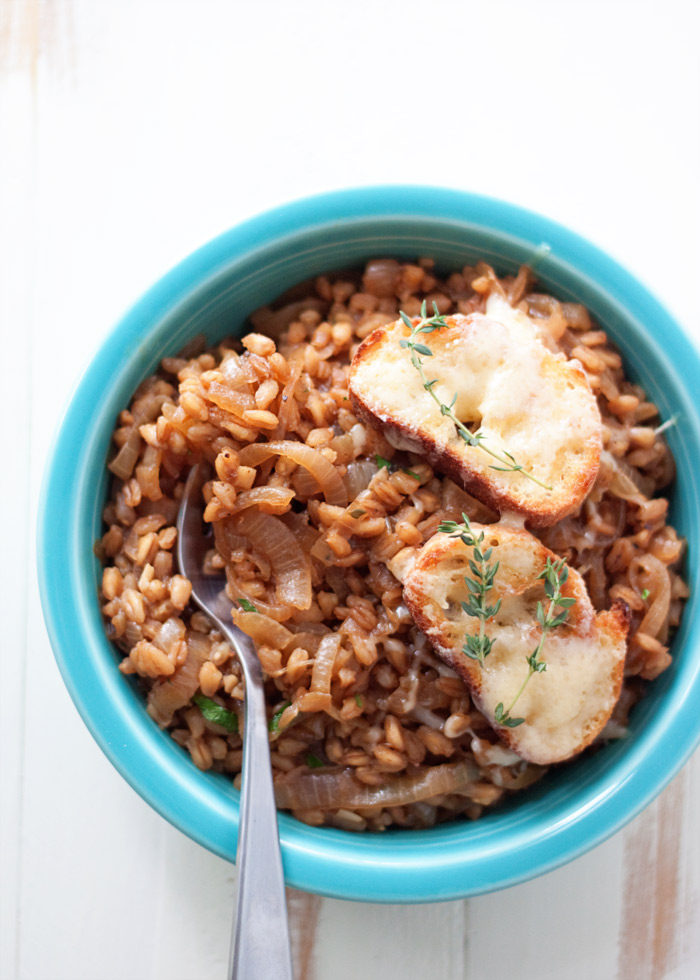 I guess you could say I’m a carb girl. Pasta, bread … why does it all have to be so delicious?! I’ve been working on losing weight, however, and most carbs don’t necessarily serve me well.

My doctor, who I’ve been working with on my diet, conceded my need for carbs and suggested I try working in grains with 5 grams of fiber or more per serving. Barley, steel-cut oats, sorghum berries, and, yep, farro make that list. Steel cut oats,  no problem. I’ve loved those for years. Barley, I do now and then. And then sorghum and farro – yeah, while I’d heard of both, I had yet to try them at home. 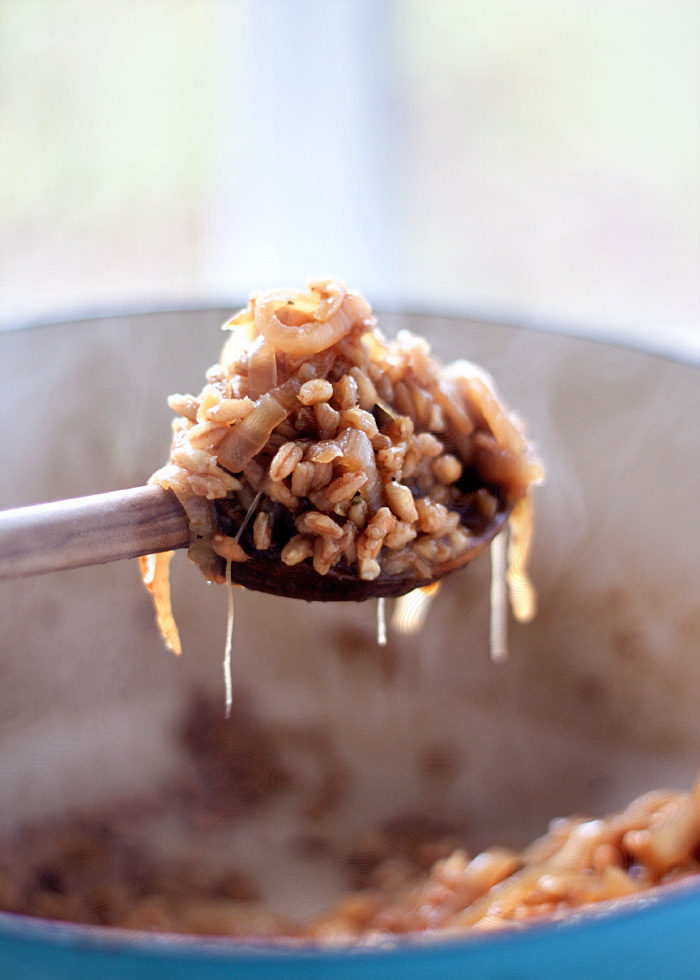 So I bought some farro, and I went on the hunt for a recipe. This One-Pan Farro with Tomatoes from the venerable Smitten Kitchen caught my eye pretty quickly. It’s a spin on the famous one-pot pasta with tomatoes, onions, and basil. And it was a delicious introduction to farro.

But while slicing up the onions, I couldn’t help but think about what would happen if I went another direction with this one-pot farro. Like, maybe oodles of onions. Cooked down to sweet caramelized perfection. A deglaze of white wine, a few pinches of fresh thyme, a little garlic … yep. I took this farro to French onion town and I never want to come back. 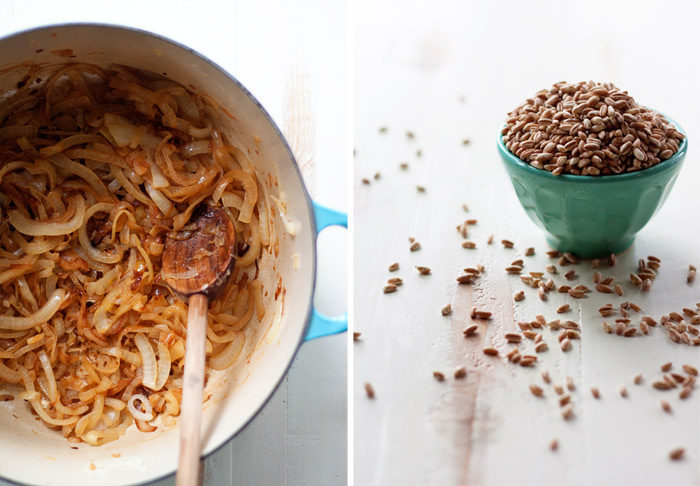 Farro is a grain somewhat like wheat, but it’s not – it’s its own plant, its own thing. It’s not gluten-free, though it is lower in gluten than many other grains. It’s high in fiber and high in protein (more than quinoa)! It’s really kind of glorious, health-wise.

Cooked, it sort of reminds me of a cross between brown rice and orzo al dente. It’s larger than a grain of rice – probably about twice the size – with a tender yet chewy texture that holds its shape when cooked. 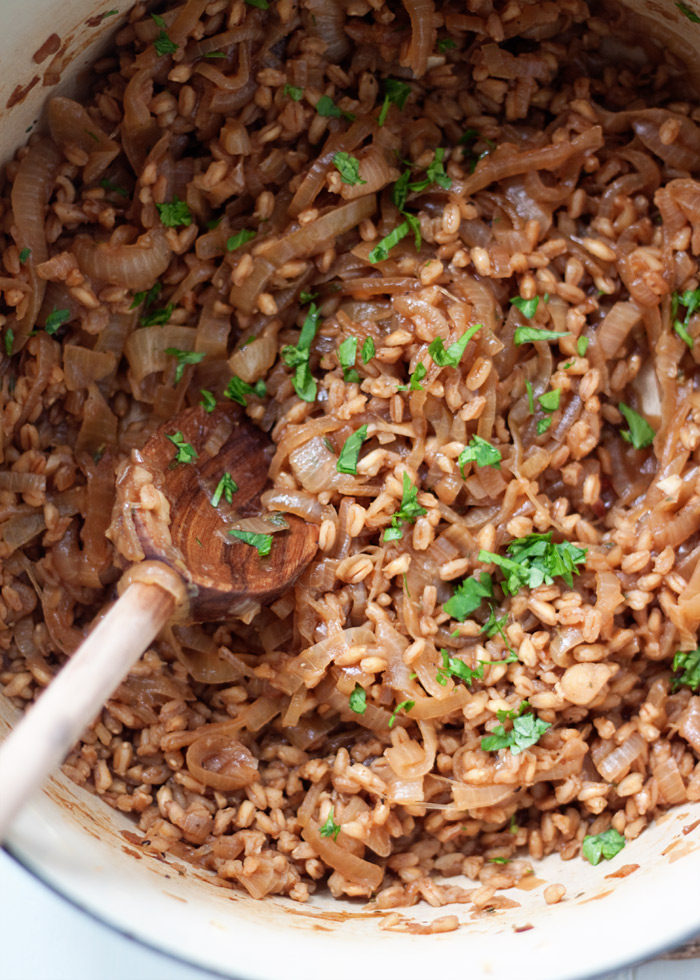 Farro definitely has personality, but the taste itself is rather mild, taking on the flavors of whatever else you put in the dish.

This One-Pot French Onion Farro reminds me of a cross between French onion soup and a hearty risotto. It works equally well as a hearty side dish or a main dish. Alone, it makes for a satisfying dinner alongside, say, a lightly dressed green salad. 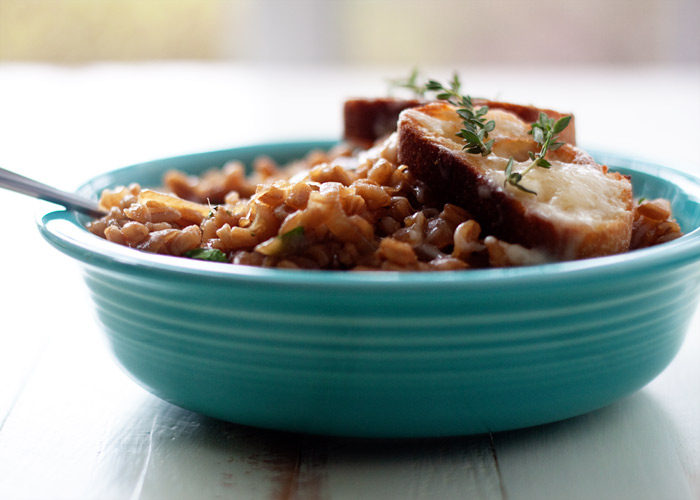 This dish does takes awhile from start to finish, but most of it is hands-off, so don’t be fooled – it’s remarkably easy. And if you plan ahead just a tad, it makes for a great weeknight meal. Heck, you could even caramelize and deglaze the onions the night before, stick the pot in the fridge, and then proceed the next evening for a faster meal. 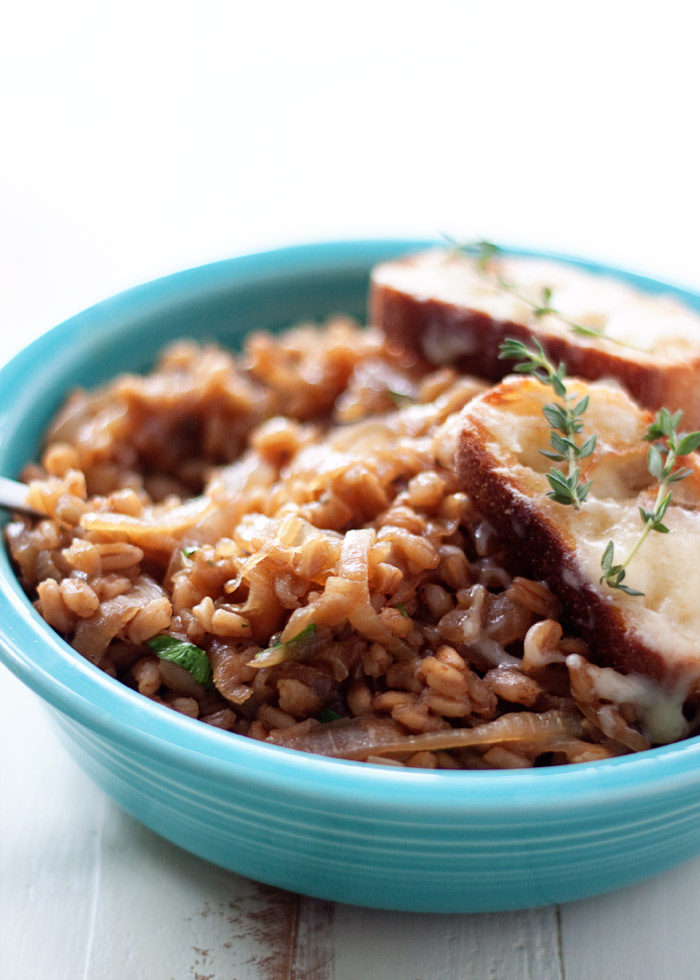 Served out of the pot, this recipe is vegan – and perfectly delicious without the cheese that you usually find on French onion soup. What I like to do is make the crostini two ways – a few have melty Gruyere for my cheese-eating guy, and a few stay naked for me.

If carbs can taste this delectable and help me stay healthy, well, I’m all for it. 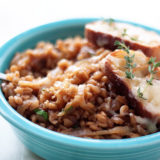 Print Recipe
Did you make this recipe?   END_OF_DOCUMENT_TOKEN_TO_BE_REPLACED
Yield: Serves 2-4

With tender-cooked farro grains and French onion flavors, this easy one-pan favorite is like a cross between risotto and French onion soup. Serve with Gruyere-topped crostini and a fresh sprig of thyme and we’re talking swoon-city. For a vegan version, just omit the gruyere – still absolutely delicious!

*A note about farro:

I prefer pearled farro for this recipe because it cooks fastest. However, labels for farro packages aren’t always clear, so go by the cooking time. If your package indicates 15-20 minutes cooking time, you likely have pearled farro. If the cooking time is more like 30 minutes, it’s probably semi-pearled. It’s totally fine to use semi-pearled farro, but it will take longer to cook, and you’ll need to add more broth (I find semi-pearled takes about 15 minutes longer than pearled and about 4 cups of broth).