So, pumpkin. I’ve been a little obsessed with it lately. I mean, it’s my job: I’m a nesting new mom, I’m thoroughly in love with fall, I’m a food blogger, I like to eat. And Nutella too, for that matter. Good gracious, how is it that something can taste that good? Dangerously delicious stuff, that Nutella.

So I thought I’d take a couple of my obsessions and combine them into something that is also pretty much perpetually an obsession: smoothies. Delighted to meet you, Pumpkin Nutella Smoothie. 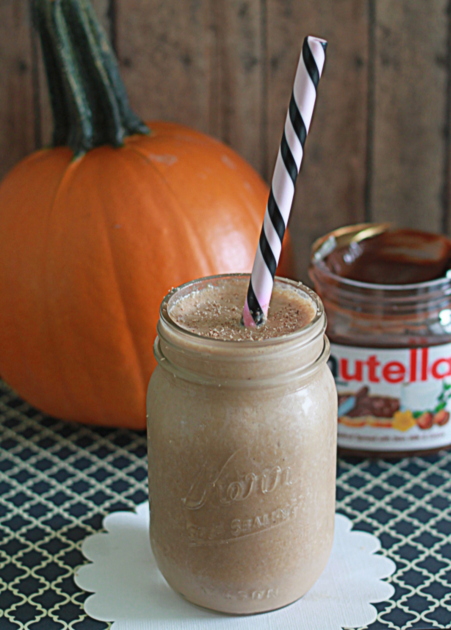 Even though this recipe, ingredient-wise, is a pretty classic smoothie – it contains banana, yogurt, milk, and ice along with the pumpkin, cozy-comfy spices, and Nutella – I really think it tastes more like a milkshake. Sort of a pumpkin pie milkshake with hints of cocoa and cinnamon and nutmeg and hazelnut and heaven, pretty much.

It’s not the healthiest smoothie around, I fully admit this. But it’s got a few vitamins thanks to the pumpkin and banana, along with a nice amount of protein from the yogurt. And, hey, it’s a heckuva lot better for you than an actual milkshake. And, it’s good.

[box type=”info”] If you do insist, this Pumpkin Nutella Smoothie would also be pretty easy to skinnify (gosh, “skinnify” should really be a word). Just use lowfat yogurt, almond milk, and maybe a little less Nutella (I know, I know. I can’t believe I suggested less Nutella, either).

This post may contain affiliate links, which means if you click on a link and make a purchase, I may receive a portion of the proceeds. More about this here.
Breakfast Drinks Fall Fast (20 Minutes or Less) Kid Friendly Smoothies Snack Time