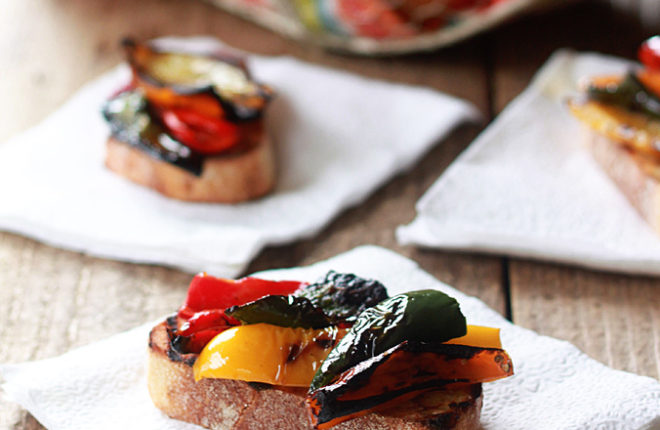 So simple, yet so delicious. This three-ingredient appetizer features a variety of peppers blackened on the grill, drenched in olive oil, and served over toasty grilled bread. Perfect as a camping appetizer, or make it in mass quantities for that big barbecue you have planned this summer. 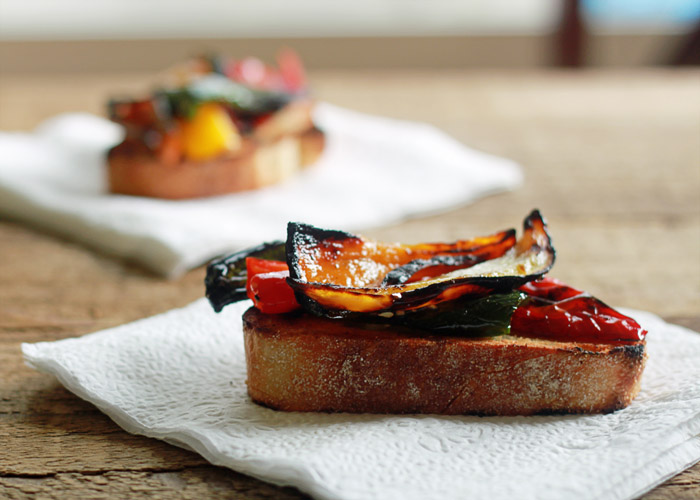 Simplicity. That’s what this roasted pepper crostini recipe is all about. Three ingredients, my friends. Three! And that’s if you count the olive oil.

It’s about therapy, too. Because there is just something therapeutic about cooking outdoors – in this case, even just the grill on our back deck.

There’s something so calming about having nothing to do but stand still, smell the smoke, and turn pepper after pepper after pepper with my tongs. I love cooking outdoors – the brisk breeze on my face, listening to the birds chirp and the bees hum and, well, okay … there’s also the wiener dog next door that barked the entire time I was making this particular recipe. But my own trusty companion – a glass of crisp white wine – helped a little with that part. Plus, the dog really is kind of cute. 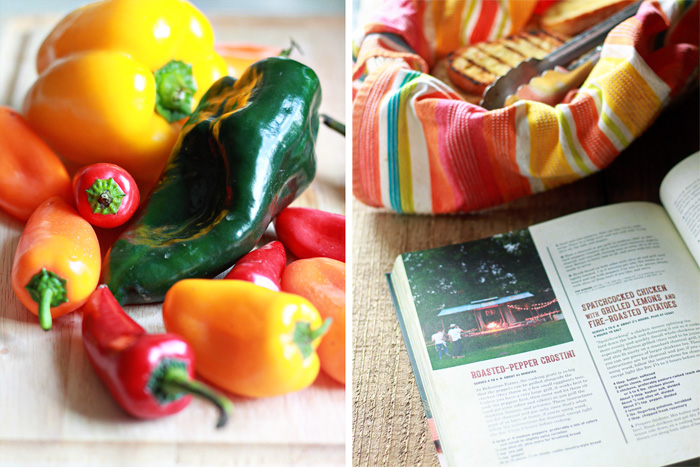 When the publishers of Sunset magazine’s newest cookbook, “The Great Outdoors Cookbook: Adventures in Cooking Under the Open Sky,” sent me a copy to review, I was – quite literally – a happy camper. It’s a photo-filled book packed with incredible ideas for outdoor cooking, from simple meatless recipes all the way to an entire pig roast (so if you’re not fond of things like the latter, you may opt to pass on this one).

As a vegetarian, I skipped the meaty recipes (my guy, on the other hand, will want to dig in) – but there are oh-so many drool-worthy vegetarian recipes I want to try. This recipe for roasted pepper crostini was the very first I bookmarked.

To make it, I bought a variety of peppers ranging from small to large and sweet to hot – bells, pasilla, ancho, and red fresno peppers – about 10 peppers total. Then I cut them into 1 1/2-inch pieces and tossed them with olive oil, salt, and pepper. 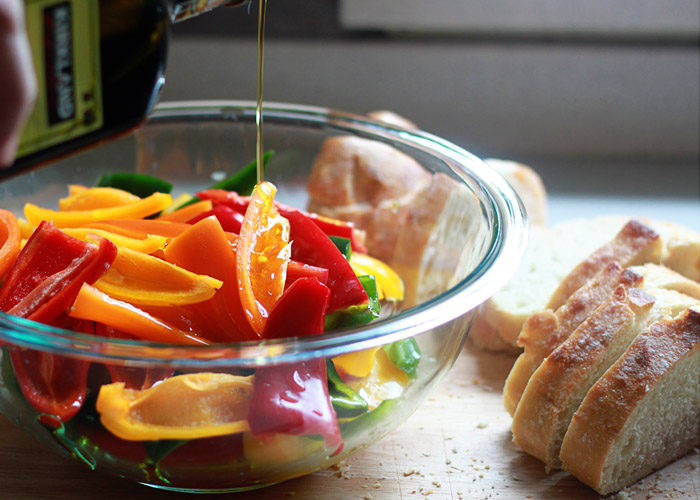 And then I grilled them. 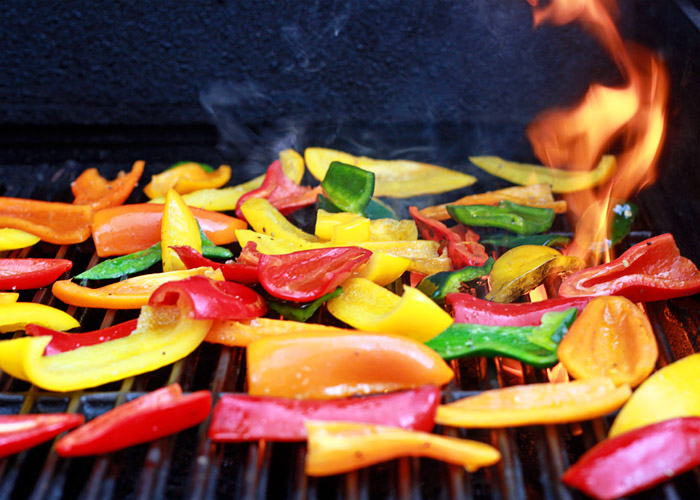 About 15 minutes over medium heat, with just a couple of flips here and there, was just about right.

After the peppers were charred and soft, I transferred them back to the bowl with the olive oil and covered them with foil. And guess what! There is no peeling the skins with this recipe! It’s totally not needed. Unfussiness – just the way I like it.

Then I brushed some crusty slices of bread with olive oil, and grilled those for a couple of minutes.
Then I just topped the toasty bread with peppers and chowed down. 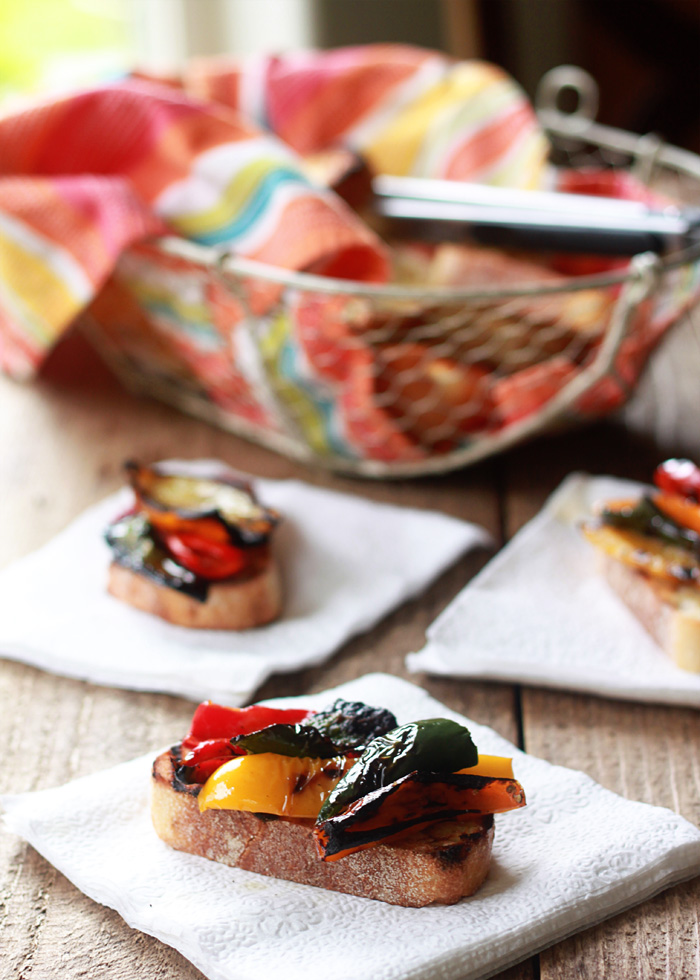 I uphold that you can totally “chow down” when you’re cooking and eating outdoors. No pinkies up here!

This recipe – and the cookbook – have me super, duper excited for outdoor grilling season. The truth is, I was in a bit of a grilling rut before I started flipping through the book. Now I’m trying to figure out how to find the time to try a bunch of new grilling recipes – and new methods, too. The book runs the gamut from campfires to home fires to inspired fires, and just to show you how thoroughly Sunset’s editors covered every aspect of outdoor cooking, they even have instructions for a DIY pizza oven. (!!!)

Hey hubbbbyyyy! We totally have the room, for one right?! 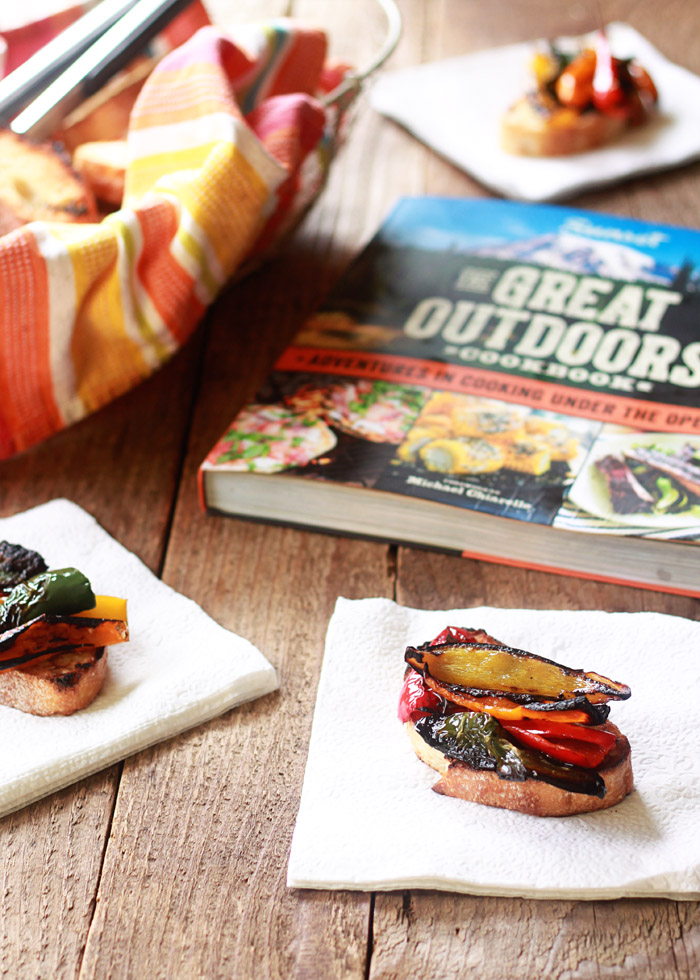 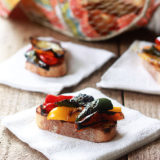 Print Recipe
Did you make this recipe?   END_OF_DOCUMENT_TOKEN_TO_BE_REPLACED
Yield: 10 - 12 crostini

So simple, yet so delicious. This three-ingredient appetizer features a variety of peppers blackened on the grill, drenched in olive oil, and served over toasty grilled bread. Perfect as a camping appetizer, or make it in mass quantities for that big barbecue you have planned this summer.

Seed and core pepper. Cut into 1 1/2-inch wide strips. Place in a large bowl and drizzle in 1/3 cup olive oil. Toss until well-coated. Add the salt and pepper; toss again.

Heat a grill to medium, about 375 degrees Fahrenheit. Move peppers from bowl to grill, reserving remaining olive oil in the bowl. Cook peppers until blistered on one side and beginning to blacken around the edges; carefully flip with tongs and cook until the other side is blistered and the peppers are soft – about 20 minutes total. Transfer peppers back to the bowl with the oil. Toss and cover with foil until ready to serve.

Brush both sides of the bread with the remaining 2 tablespoons olive oil. Grill bread until toasted on the edges and warmed through, 1-2 minutes per side.  Set toasts on a board or plate and top with peppers. Drizzle with remaining olive oil from the bowl. Serve.

From Sunset’s The Great Outdoors Cookbook: Adventures In Cooking Under the Open Sky