Stuffed bell peppers are the perfect dinner for us in our multivore home. Can anyone say “individual servings?” Oh man, I love individual servings. That means that each one can be tailored to preferences or diets without hardly having to lift any additional fingers. And everyone’s happy. 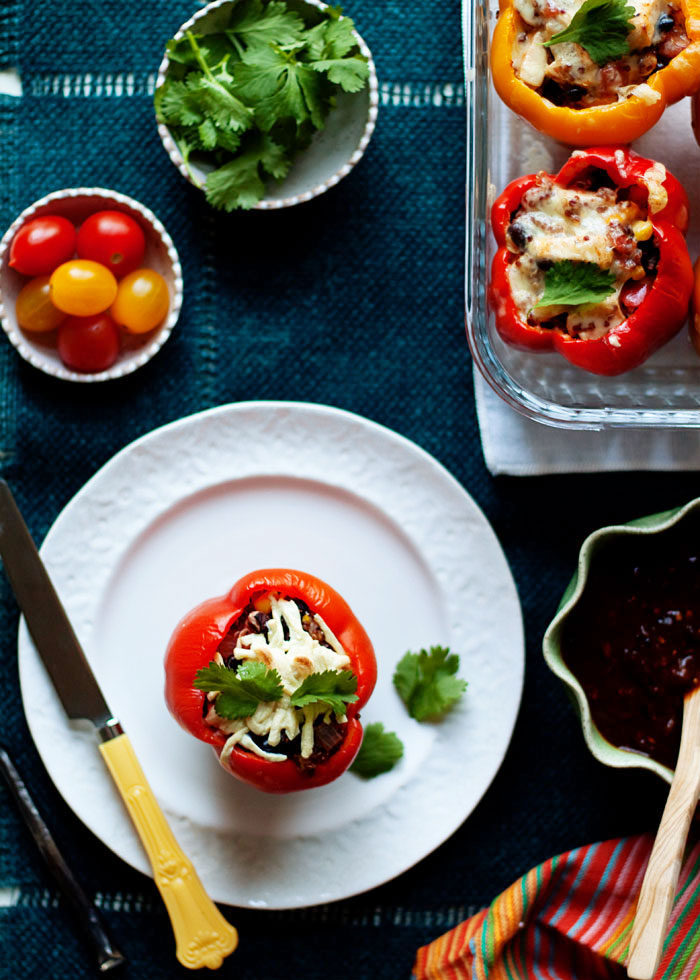 In the case of these Southwestern Black Bean & Quinoa Stuffed Peppers, they can be made a myriad of ways. Vegetarian, of course. Vegan, yes – just omit the cheese, or sub vegan cheese, and maybe even add some avocado to the top when serving for some added creaminess. Meaty, you bet. Mix in some chicken and the carnivores are good to go. (Note that most traditional stuffed pepper recipes call for ground beef, but we opt for something a little healthier. Ground beef is also totally doable, though!) Gluten-free? Well, they already are! So, perfect!

I love the mix of flavors and textures in this stuffed peppers recipe. I tried to keep it as simple as possible, because stuffed pepper recipes can get kind of labor-intensive before you even get them into the oven. Cook the rice (or quinoa), saute the onions for the filling, blanch the peppers  … I tried to do away with the those last two. As far as sauteing onions goes, I tried to leave onions out entirely, and no bueno. The filling just didn’t have enough flavor. And you’ve gotta saute the bad boys for maximum flavor (and decent texture). So I do include the step of sauteing onion, some chopped bell pepper, and oregano together. 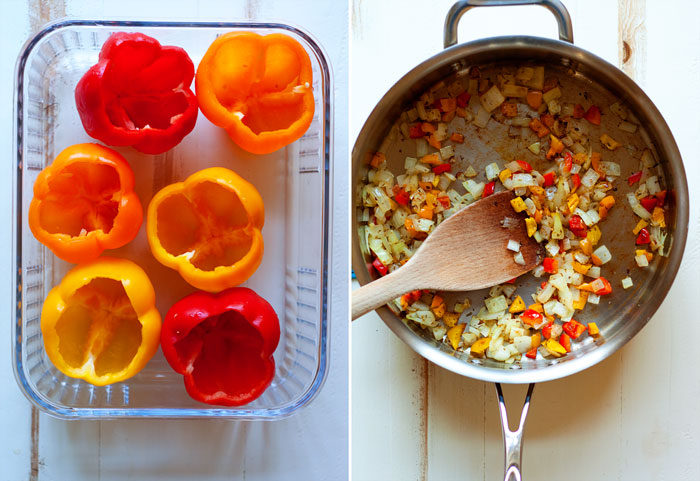 Now, blanching the peppers – this is something that a lot of people suggest so that the pepper has the right texture when done baking. But I found that following Real Simple’s method of cooking the peppers in a water bath worked remarkably well. So there’s one less step!

Really, these do come together pretty quickly, all told. Making the quinoa ahead of time helps (or you could actually make the entire filling ahead of time if you like). Then stuff and bake! 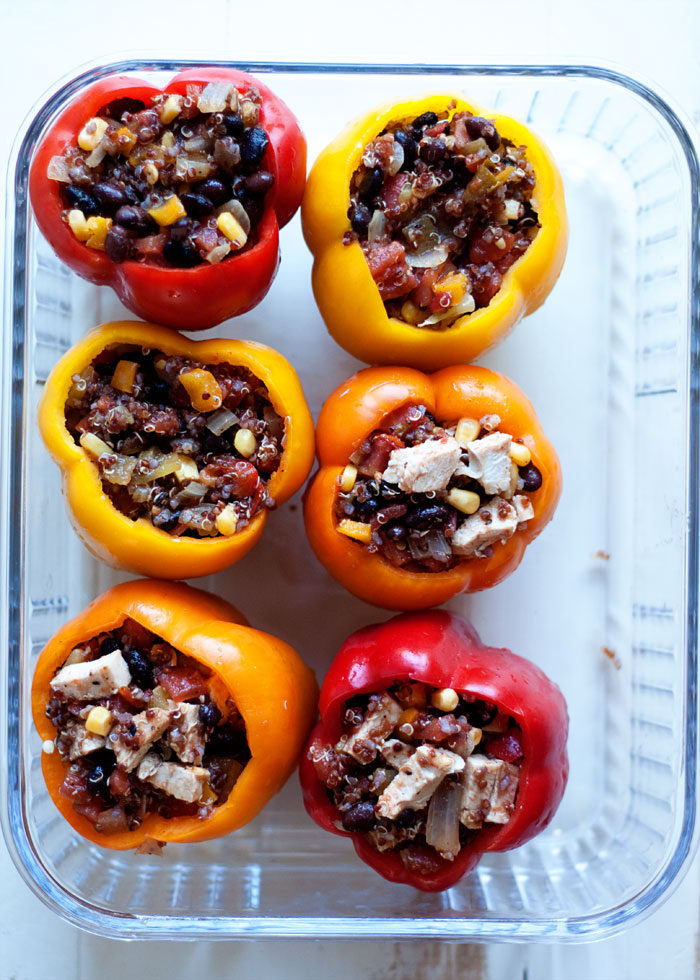 Once they’re all baked, drizzle a little sour cream or vegan sour cream over the top, serve with salsa, some avocado, maybe a little extra cheese for the dairy-inclined … perfect weeknight dinner. Sold. 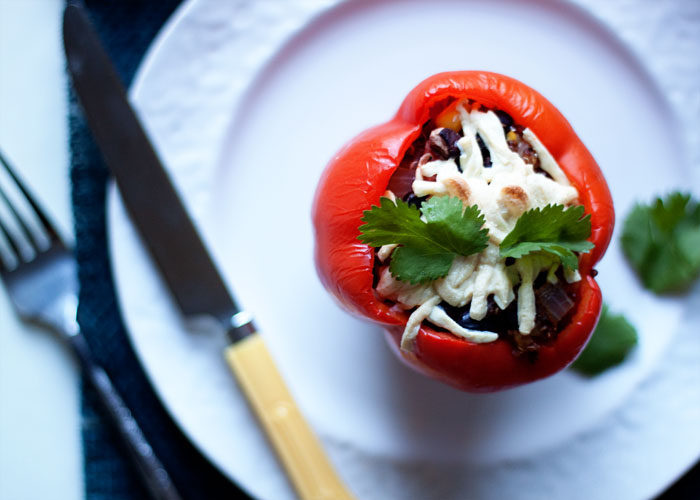 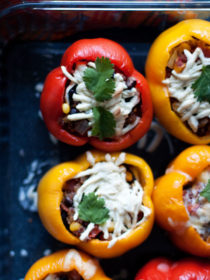 Add cooked, diced chicken to the mix - about a scant 1/4 cup per pepper. I first filled three vegan peppers for myself then mixed in about 3/4 cup cooked chicken for the meaty versions.

Omit cheese or use vegan cheese.

The recipe is written so that you'll have ample filling for just about any size bell pepper, so there's a chance you'll have some left over.

More stuffed pepper recipes from around the web 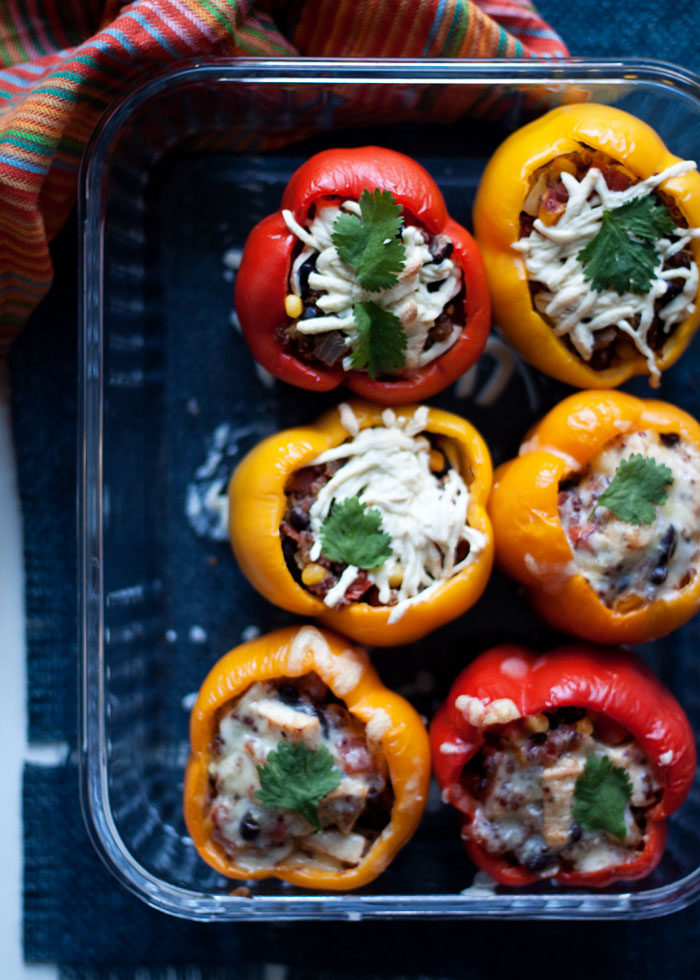 This post may contain affiliate links, which means if you click on a link and make a purchase, I may receive a portion of the proceeds. More about this here.
Comfort Food Dinner Entrees Healthy Kid Friendly Lunch Meal-Worthy Sides Protein Powered