I have to admit, I went back and forth on whether or not this really merited an entire post. But you know what? We’re all short on time these days, and sometimes the super-simple, super-duper-quick things actually make us smile the biggest. And smiling is good. And so, I decided to share.

My little girl’s first birthday was a couple of weeks ago, and even though her party was a fairly small family affair at home, I had Big Plans (capital B, capital P) for a dessert table. I blame Amy Atlas and Jenny Cookies. 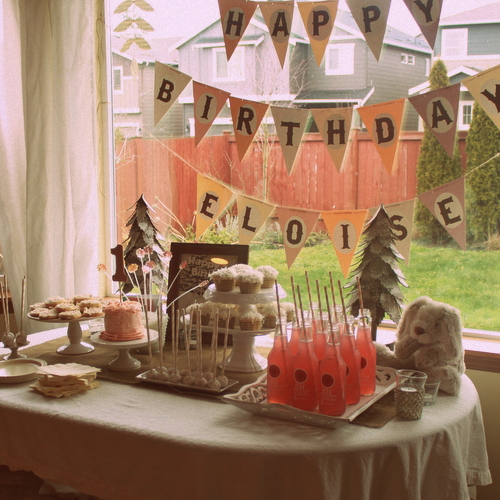 I’ve entertained enough that I know better than to bite off more than I can chew (no pun intended). I keep things relatively low-fuss. Usually. But this dessert table for my only child’s only first birthday, well, it needed cake pops.

We scheduled the party at 11 a.m. – usually a reliably good time right after her morning nap. That was sort of a brunchy time, so I picked up some donut holes.

Not long after I got home with the donut holes and all the other party-related groceries, panic set in. After making cupcakes and her smash cake and cookies and her birthday banner and wrapping her presents etc. etc. etc., I realized I was out of time. But then I looked at the stripey straws. And I looked over at the donut holes. And then these happened.

Okay, I’m a little embarrassed. But seriously, they’re kind of cute and cool, right? I mean, you just stick an 8-inch paper stripey straw halfway into a donut hole. Done.

And they totally added that much-needed cake-pop-esque element to the table. 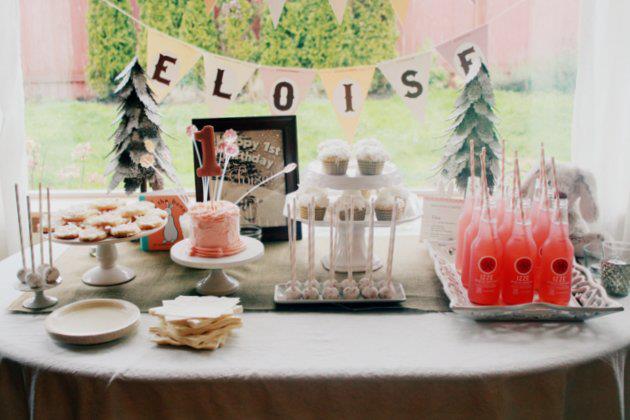 Okay, here I disclaim and digress, but there’s a slightly humorous smash cake story coming, so please bear with me:
Regarding the photos, forgive the over-processing (trying to drown out the badly-winterized backyard), and please also forgive the oddly-placed paper plates and napkins (yes, totally running out of time) and the candle holders that I forgot to put away. End disclaimers.

Oh, do you see the adorable bunny invitations to the right in the background there? They are a free printable from One Charming Party – I just made some slight tweaks in Photoshop and they were good to go. You can’t really see it in any of the photos, but they have a cotton ball tail! So cute. And the basically-free “1” smash cake topper was made from scrapbook paper. Such a great idea from the Hellobee blog. I love the blogosphere.

Anyway, would you like to know the story of the smash cake?

So I lovingly made the smash cake from scratch (I used this recipe [I have no idea what Cake Boss software is, I just like the recipe] which made exactly 12 cupcakes and three four-inch cake layers [though I only used two]). 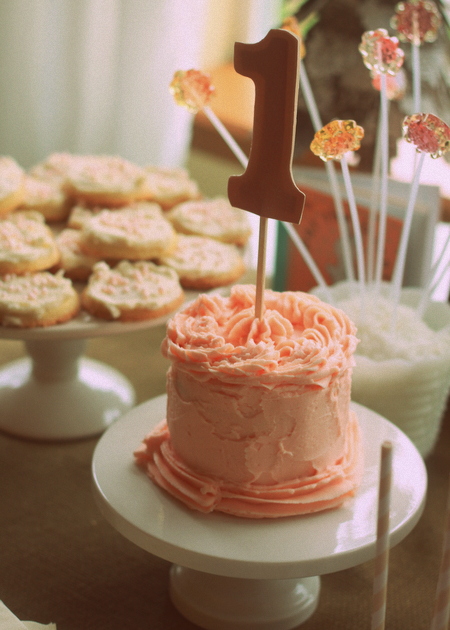 I realized this way after the fact, but it kind of looks like a boob, doesn’t it? A square one, but hello, it’s flesh-colored AND I just had to do that bit of frosting in the middle! Sorry. Digressing.

Anyway, we put it in front of our darling babe not once, but twice. First at the party, second right before dinnertime.

For the most part, both times the kid was unimpressed, touching and tasting the slightest bit of the frosting here and there. Any damage to the smash cake that you see here is from her doting parents who attempted to demonstrate just how the smash cake thing works. 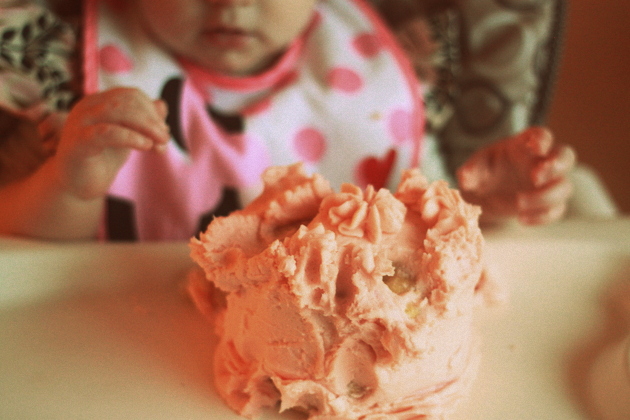 After the second try, we gave up, placed the tray on the dining room table, hustled out to dinner at our favorite Mexican restaurant, and didn’t give it a thought again until the next morning, when we noticed a bit of raspberry jam filling and a few crumbs scattered about the table.

And then: “Huh, would you look at that.”

Lizzie, skulking under the table, looking as guilty as she could ever possibly look. And then we noticed the claw marks on the table from our 55-pound dog who managed to climb up and lick the tray perfectly clean.

Well, at least the dessert table looked cute, and at least SOMEONE enjoyed the smash cake.

This post may contain affiliate links, which means if you click on a link and make a purchase, I may receive a portion of the proceeds. More about this here.
Appetizers Breakfast Cocktail Hour Crafts Dessert Desserts Fast (20 Minutes or Less) Kid Friendly Kitchen Hacks & Tips Snack Time