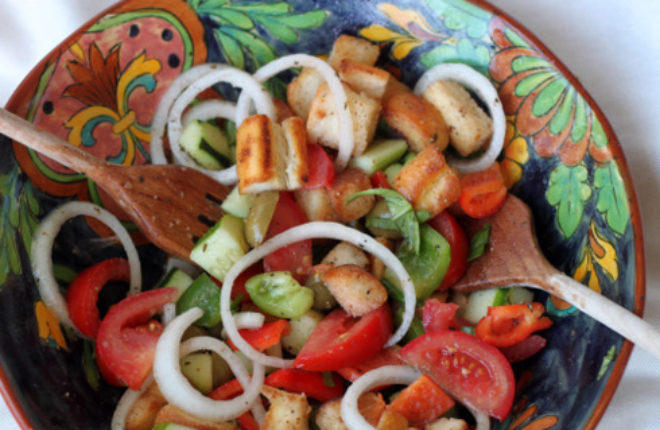 Panzanella may be the best salad idea ever – and I’m pretty sure this is the perfect panzanella recipe. Olive-oil-toasted bread hunks, rustic chops of green and red peppers, tomatoes, and more, plus basil plucked fresh from the garden… good, good, good stuff.

I’m not Italian. So, totally, not even close. Even if one of my ancestors contributed a teensy amount of Italy to my melting-pot blood, I’m thinking it turned out to be a recessive thing.

Which is kind of a bummer, really. I’m so white bread. I don’t have the first clue how to say “mozzarella” or “biscotti” like Giada does. Eating that stuff, though, is a different story. I am pretty good at that.

And Panzanella, also known as Italian bread salad. I’m sure my version – based on the Ina Garten version and the version I personally think is the most perfect salad ever – is Americanized to the nth degree. It’s also insanely delicious.

The bread is more like big, beautiful croutons than limp mounds of soggy stuff (which, I admit, the first time I heard of bread salad, this is what I imagined). Olive-oil-toasted bread hunks along with rustic chops of green and red peppers, tomatoes, cucumbers, sweet onions, green olives, and basil plucked fresh from the garden, then tossed with a nice olive oil and balsamic dressing kissed with Dijon mustard. This stuff makes me want to write run-on sentences.

Here in Seattle, we’re finally seeing a few tomatoes ripen. Why not find a use for that half loaf of stale bread you’ve got laying around, and a couple of those amazing tomatoes? Oh, and here’s the audio file of how to pronounce “Panzanella” so you don’t have to go around saying “Panzaneeya” or “Panz… [mumble, trailing off].” Not that I ever did such a thing. 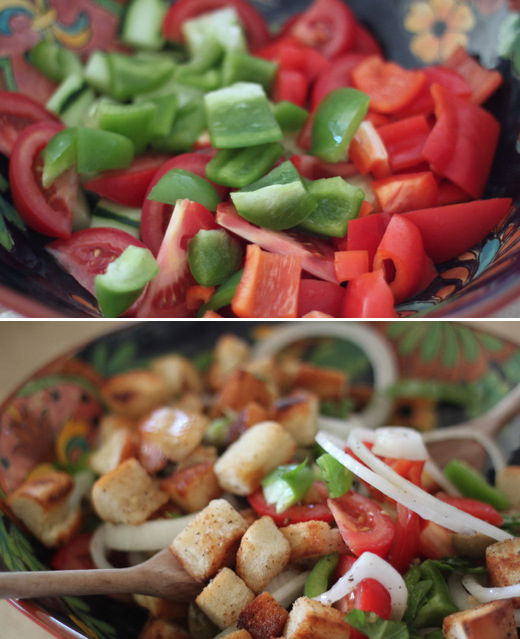 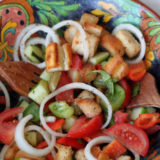 Print Recipe
Did you make this recipe?   END_OF_DOCUMENT_TOKEN_TO_BE_REPLACED
Yield: Serves about 4