Put simply, these vegan dinner rolls are THE BOMB. Soft, fluffy, and total people-pleasers. Read on for the story behind these rolls, along with all the tips you need for perfect yeast rolls every time.

My grandma, or “Gran” as we called her, made the most epic dinner rolls. Soft, fluffy, a little sweet, and a lot buttery … pure heaven. She would bring them to every holiday gathering and we kids would grab at them like they were going out of style. Grown-ups too. 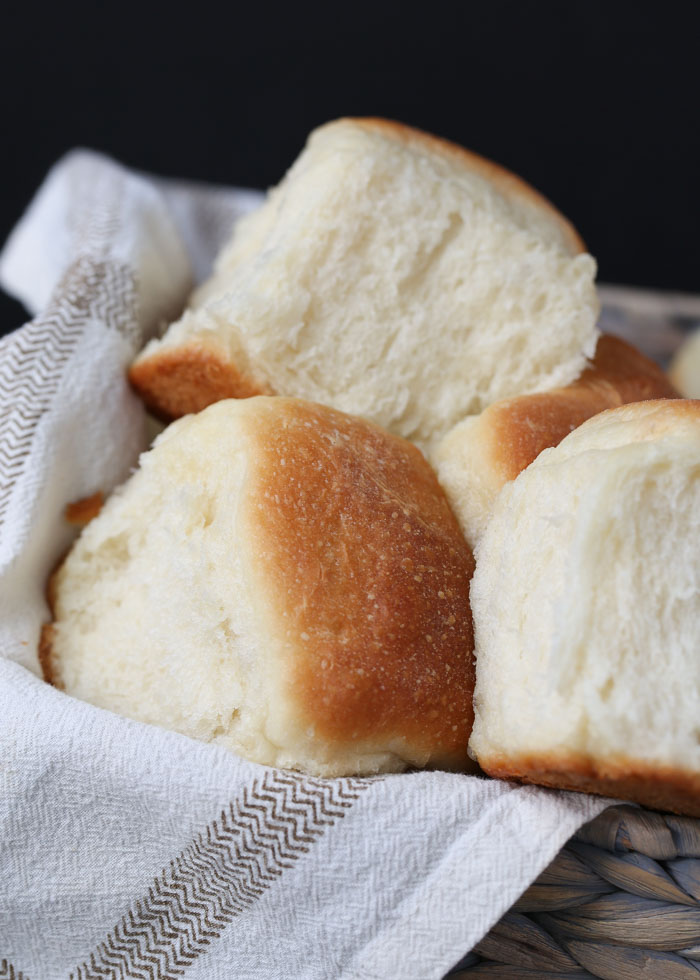 Even better were leftovers. For breakfast next day we’d slice them thin, pop them in the toaster, then generously butter them for the most glorious “toast” ever.

My Gran jotted down her recipe after many requests from family, but try as I might to translate it, I’ve never been able to replicate her rolls – not even close. Until now! Even better, I’ve veganified them (is that a word? It should be!) so that I can enjoy them too. 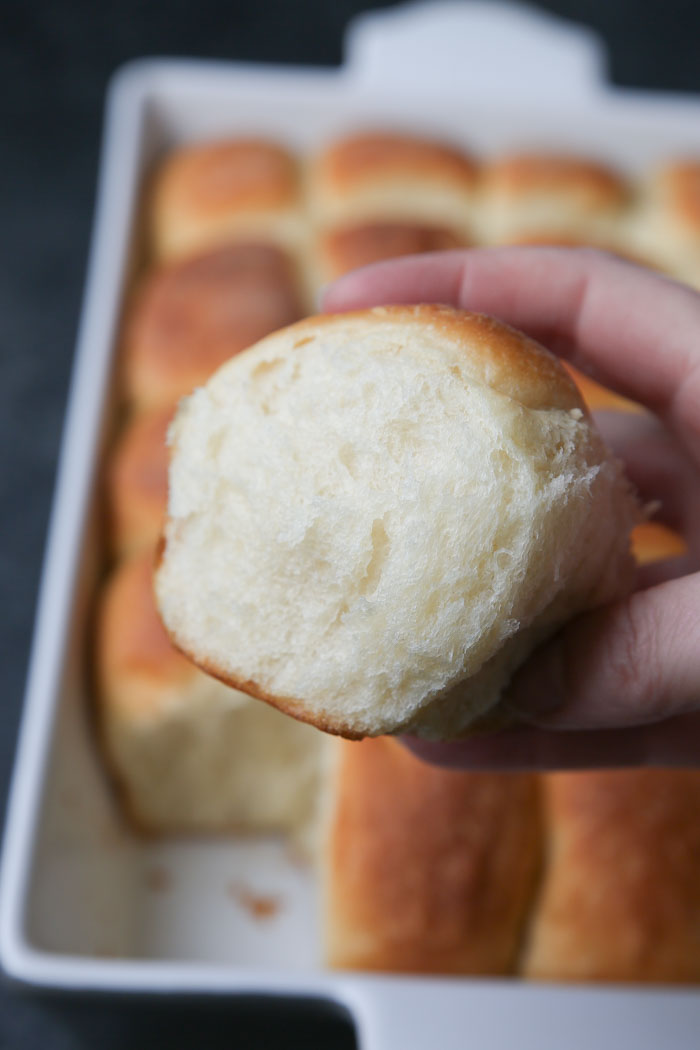 Gran didn’t usually crowd her dinner rolls in a pan like I’ve done here – she’d space them on a cookie sheet for maximum browning on all sides. Sometimes I like to cook this vegan dinner rolls recipe that way. But today, I’ve got the crowded, store-bought-but-not-perfect-enough-to-be-store-bought-and-that’s-a-good-thing thing going on here. 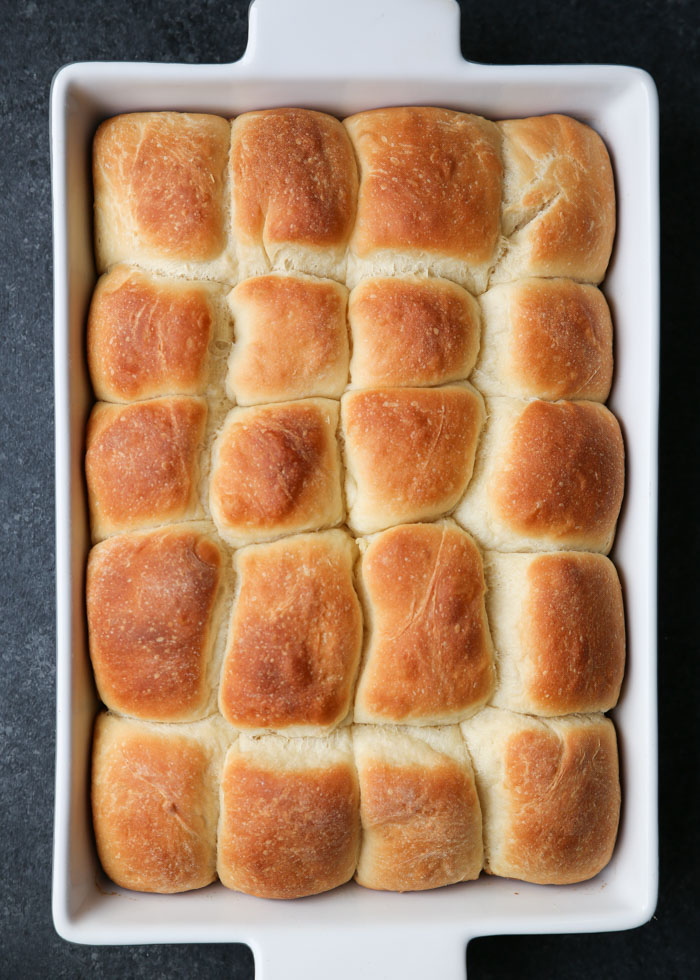 This recipe swaps in Earth Balance, a vegan butter, for the butter typically found in dinner roll recipes (or, in Gran’s case, margarine – which, incidentally, can often be vegan!)

For the milk, I’ve found unsweetened soy milk has the best taste (I also tried these with almond milk but the almond milk lended a not-so-pleasant taste. Soy it is!) 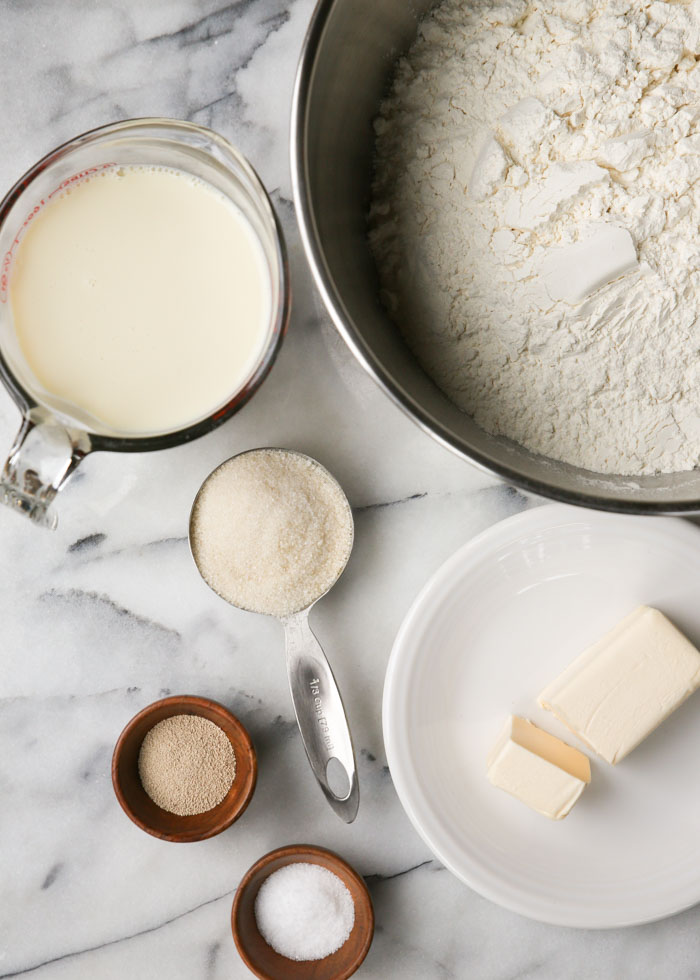 Many dinner roll recipes call for eggs, but with these being vegan dinner rolls, I’ve left the egg out and added a bit more butter instead. I honestly don’t notice a difference between this dough and the enriched/egg situation, which was a happy and somewhat surprising discovery.

I’ve found there are a few key tricks to churning out perfect yeast rolls:

Trick #1 for the Best Vegan Dinner Rolls: Make sure your yeast is alive and well, and use a thermometer! 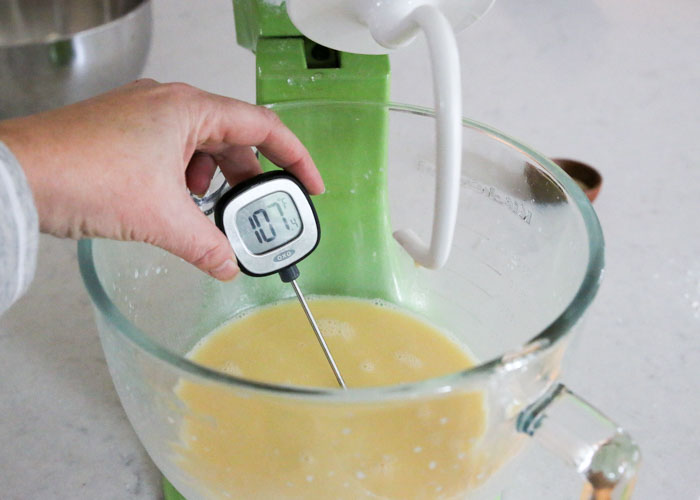 Liquid temperature is between 100°-110° Fahrenheit. You’re good to go! 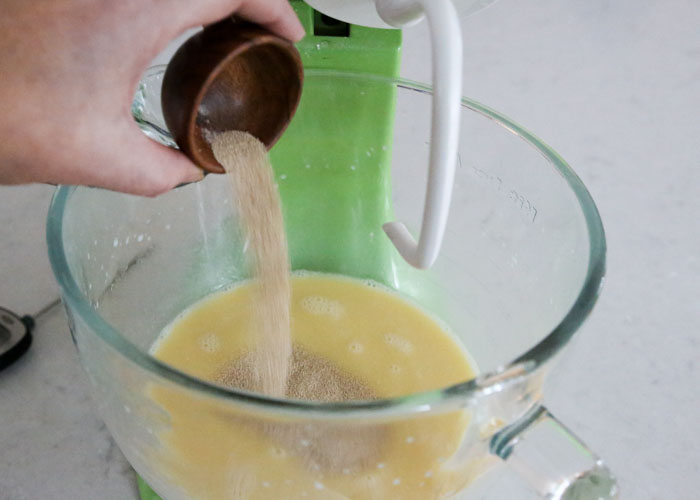 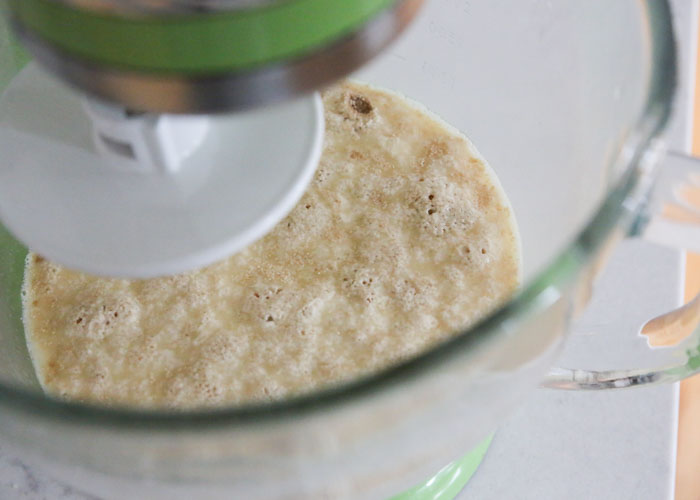 After 5 minutes. Look at those bubbles! It’s allliiiive!

I used to put way too much flour in my dinner roll attempts – now I know better! I err on the side of keeping the dough pretty sticky and wet. I use (and recommend) a stand mixer, and once about 3/4 of the dough is balling up on the beater but the rest is sticking to the bottom immediately after adding the flour, I stop adding flour. When I turn it out to place it in a bowl to raise it, a bit is going to stick to my hands. And that’s okay! If that happens I know I’m on the right track. 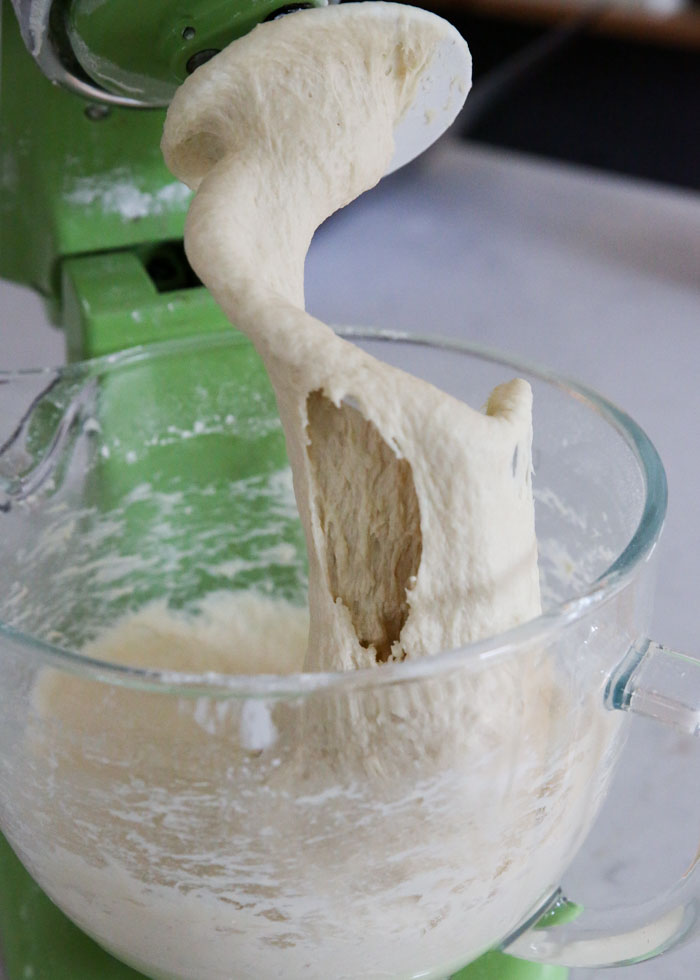 This photo shows the dough after kneading in the stand mixer for 5 minutes. It’s still pretty sticky – but perfect!

Trick #3: Find the perfect, warm(ish) place for the rise

There’s a particular spot on my kitchen counter, to the left of the range and where the sun tends stream in the window, where my dough is most likely to rise.

I’ve also found that now that we have newer, colder quartz countertops, my dough isn’t as happy. So I set the bowl on a trivet or potholder. 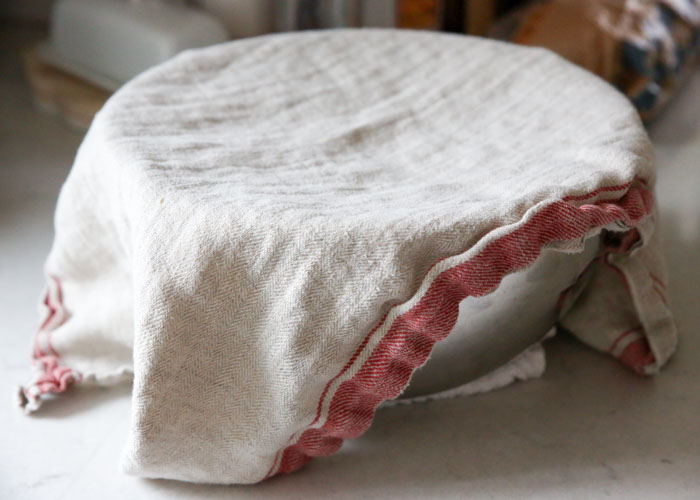 Trick #4: Butter the tops for that nice golden color 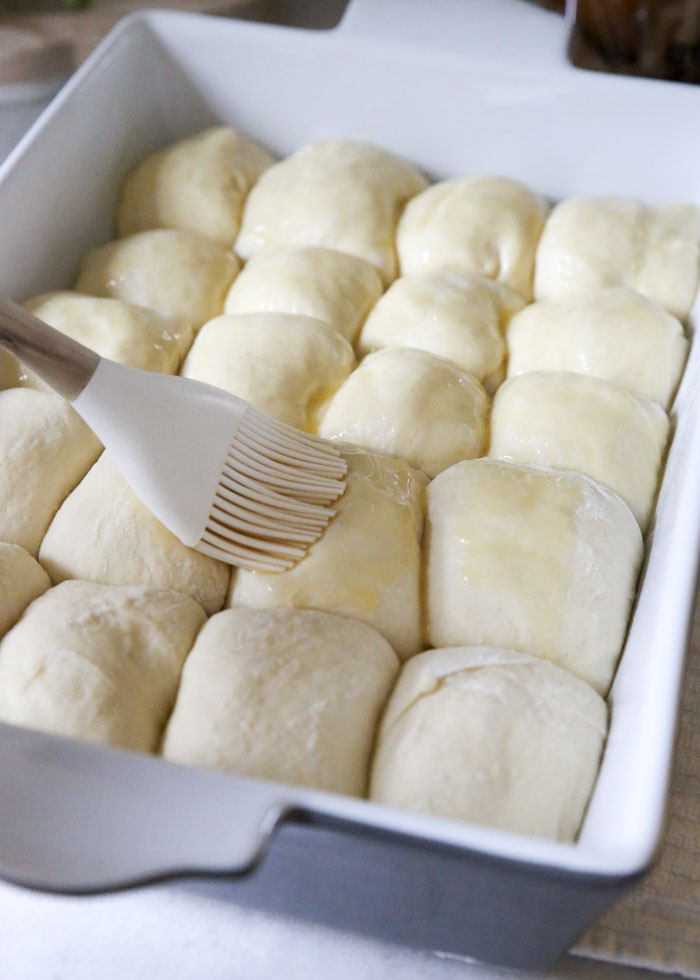 Trick #5: Know when to cut your losses

If your yeast doesn’t bubble or your dough (for this particular recipe) doesn’t double in size within 60 minutes, it’s probably not worth your time to continue with the recipe. I’ve found whenever I power through with a failed proofing or dough, the result is really not worth the effort. Better to toss it and start over.

Gran called her dinner rolls “buns,” the source of much snickering amongst us kids when we were little. So as much as I want to call these “Gran’s Buns” and probably will around home, publicly I’ll be calling them Soft & Fluffy Vegan Dinner Rolls.

Whatever you choose to call these vegan dinner rolls, I hope you love them as much as we do! Especially the leftovers. 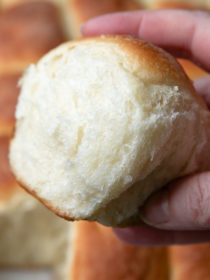 4.97 from 31 votes
Please the vegans without disappointing the carnivores. These soft, fluffy, buttery, and melt-in-your-mouth dinner rolls are total crowd-pleasers - no eggs or dairy needed.
Print Pin Rate
Yield: 20 rolls

131 Comments on “Soft & Fluffy Vegan Dinner Rolls (That Everyone Will Love!)”