As someone who hasn’t yet perfected her pie-making game, galettes are the perfect homemade dessert for me. You want rustic? Oh, I can definitely do rustic! 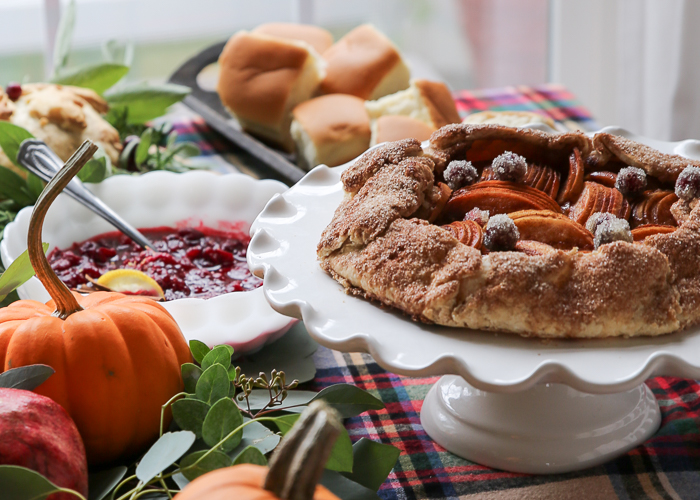 Galettes are sort of a free-form pie, cooked on a baking sheet instead of in a pie tin. You roll out a disk of dough, fill it with good stuff, and then just fold over the edges to keep it all contained and bake. 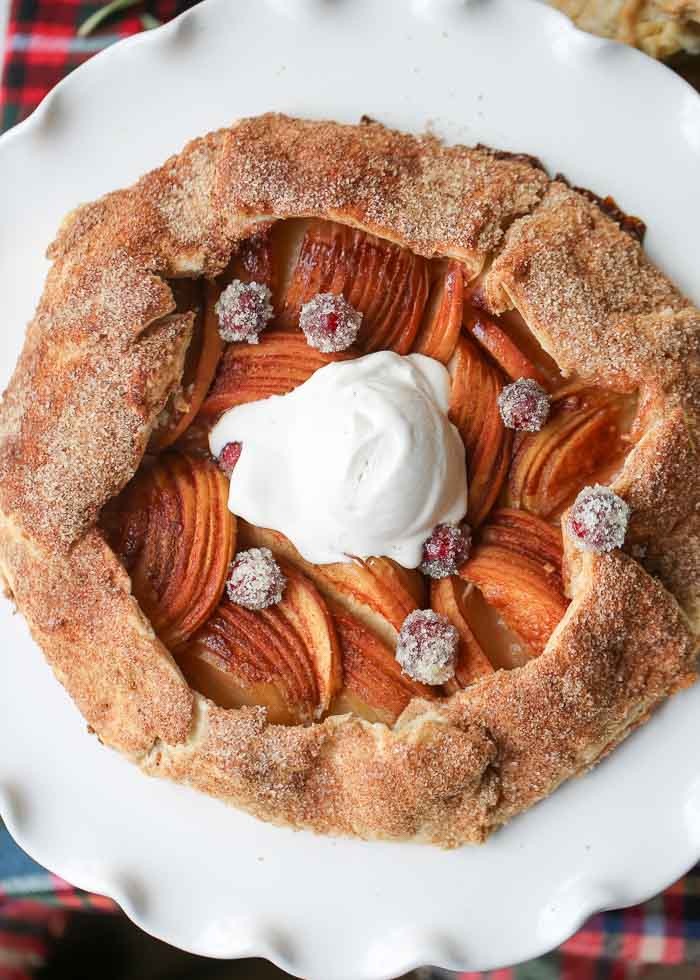 First, you make your crust. I tried a couple of vegan crust recipes (like this coconut oil version from Minimalist Baker which is delicious and ultra-tender yet I found it to be a bit too fragile for this recipe, and this vegan pie crust from It Doesn’t Taste Like Chicken). I finally landing on my own version of vegan pie crust that results in a dough that is really easy to work with yet yields a tender and tasty crust.

First, you make that delicious crust, rolling it out into a 14-inch circle, trimming the rough edges, and transferring to a large cookie sheet.

And then we have the apples. Honeycrisps here. Such a delicious all-around apple, just tart enough to play well with a nice heap of cinnamon and sugar. I keep the peel on, because I like how it looks. Plus: Easier.

To cut the apple, I slice four large pieces off the apple, leaving a square core. Then I slice the apple pieces really thin – about 1/8 inch – holding the pieces of apple together so I can keep them in a group when I arrange them on the galette.

Leave about a two-inch border around the edge. 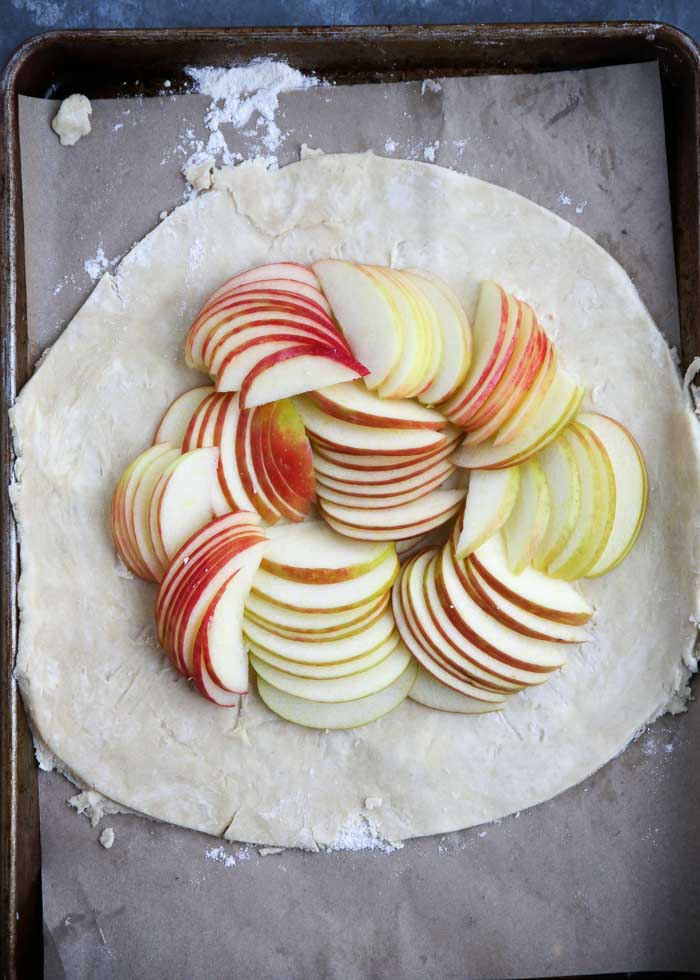 And then fold over the edge, sort of crimping and folding as you go. Again, rustic is the name of the game – and thank goodness for that. I can do rustic. Neat pie crimps and incredible lattice tops? Notsomuch. 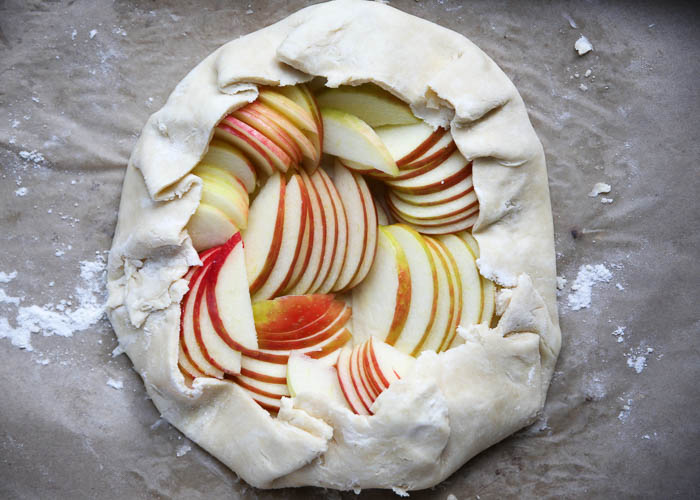 Then, brush the edges with pure maple syrup. This helps the obscene amount of cinnamon sugar you’re about to sprinkle on adhere to the crust and gives you that delectable crunchy edge. And then bake until bubbly and golden brown. Serve up with a nice scoop of vegan vanilla ice cream and YUM! Dessert is served. 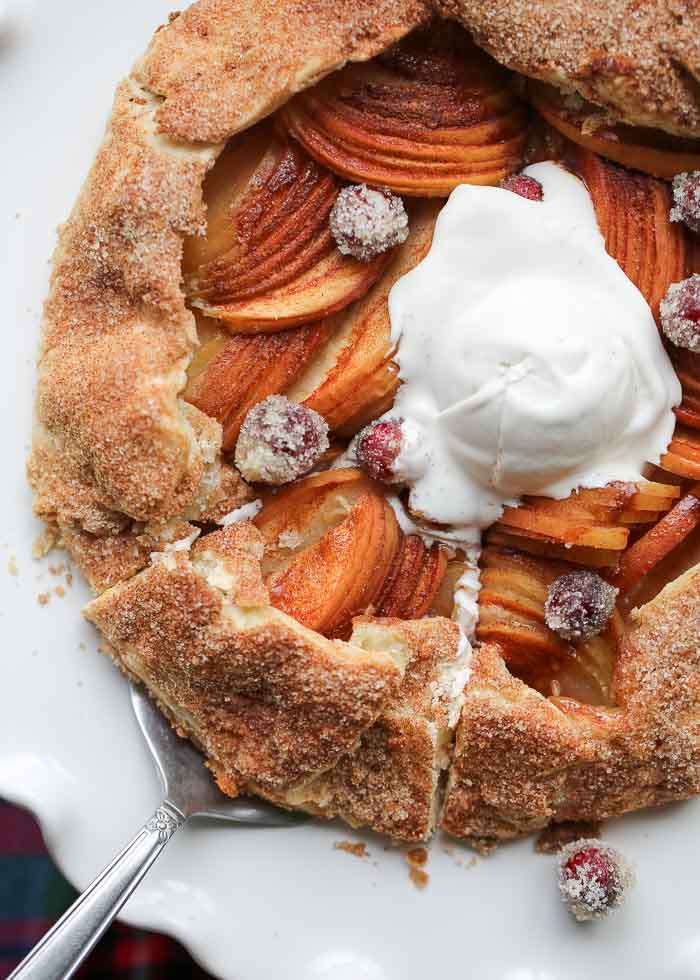 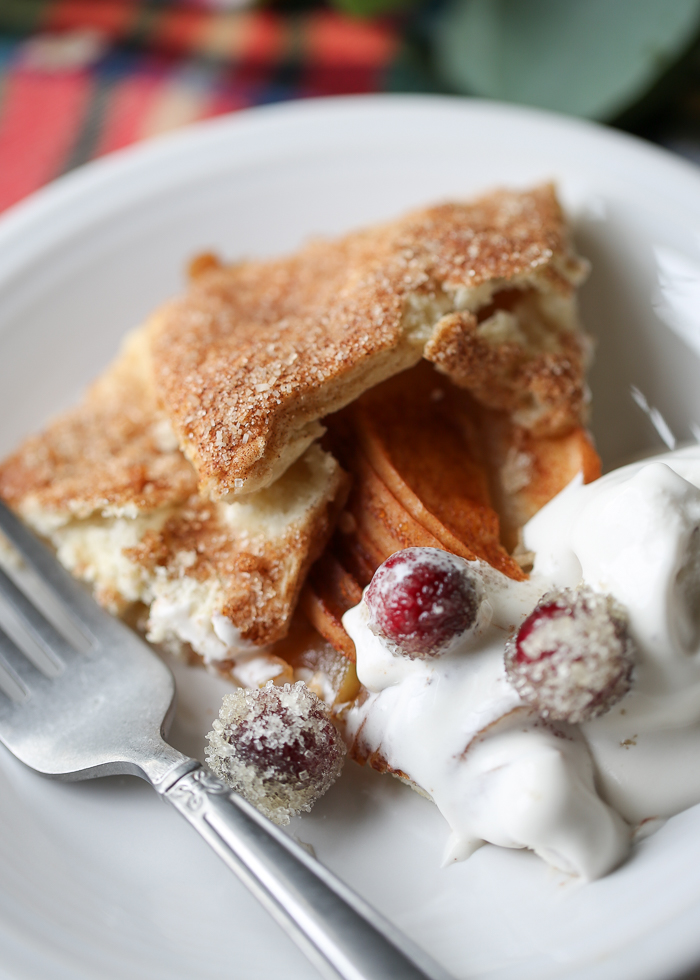 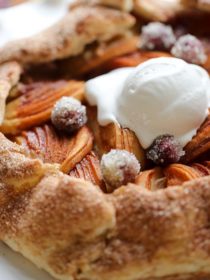 No ratings yet
An easy yet impressive freeform tart with a tender crust, delicious thin-sliced honeycrisps, and a generous dousing of cinnamon-sugar. Don't forget the vegan vanilla ice cream!
Print Pin Rate
Yield: 1 galette - serves about 6

For the remainder of the galette:

* Here's how to make sugared cranberrieshttps://www.kitchentreaty.com/sugared-cranberries!
This post may contain affiliate links, which means if you click on a link and make a purchase, I may receive a portion of the proceeds. More about this here.
Christmas Comfort Food Dessert Desserts Fall Holidays Pie Recipes Vegan Desserts

« Previous PostMaple Spiced Cranberry Sauce
Next Post » Looking Ahead to 2020