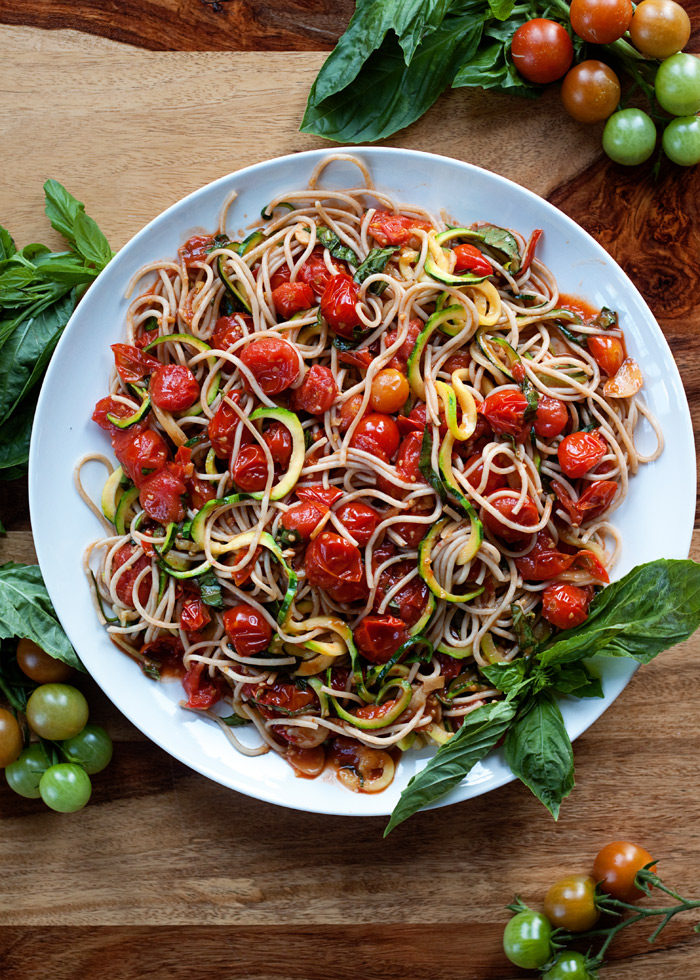 Many people have packed up their summer gardens by now, but here in the Pacific Northwest, we’re squeezing out every last drop of the season. Zucchini’s still growing by the armful, and right now is when the tomatoes really start to ripen – even the short-season ones (and lord do we have a short tomato season here). Every blessedly warm day, a few more tomatoes blush into being, and I can hold onto summer and all its glorious produce for one more day (even while I’m wandering the garden with a pumpkin spice latte in hand – it’s all about the transitions after all!)

I’ve been experimenting more with spiralized zucchini this year, and as you can see, I’ve been loving the stuff. Better late than never trend-wise, eh? 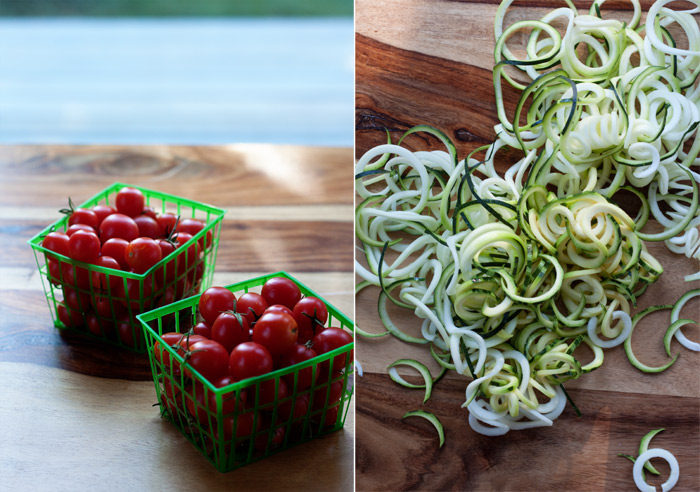 So this sauce. It’s so very simple. Basically, you saute garlic in a good bit of olive oil, then you add the cherry tomatoes. Cook, cook, cook until they burst, and all those wonderful juices form a lovely thick sauce. 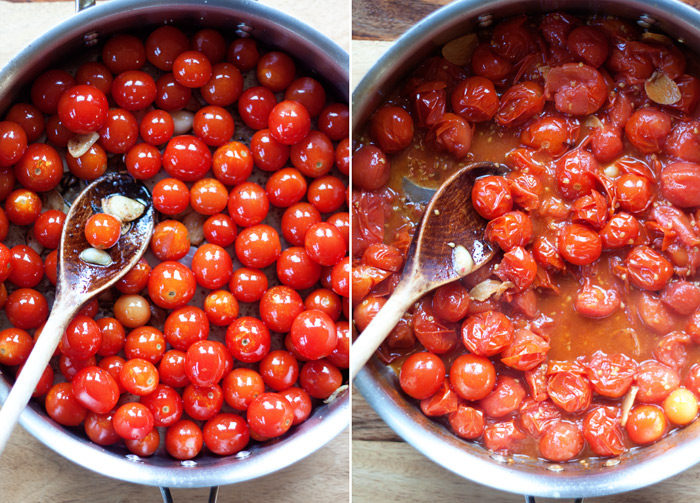 Add a handful of fresh basil and some salt and pepper and you have a pasta sauce in as much time as it takes to boil pasta. Talk about an easy late summer dinner. 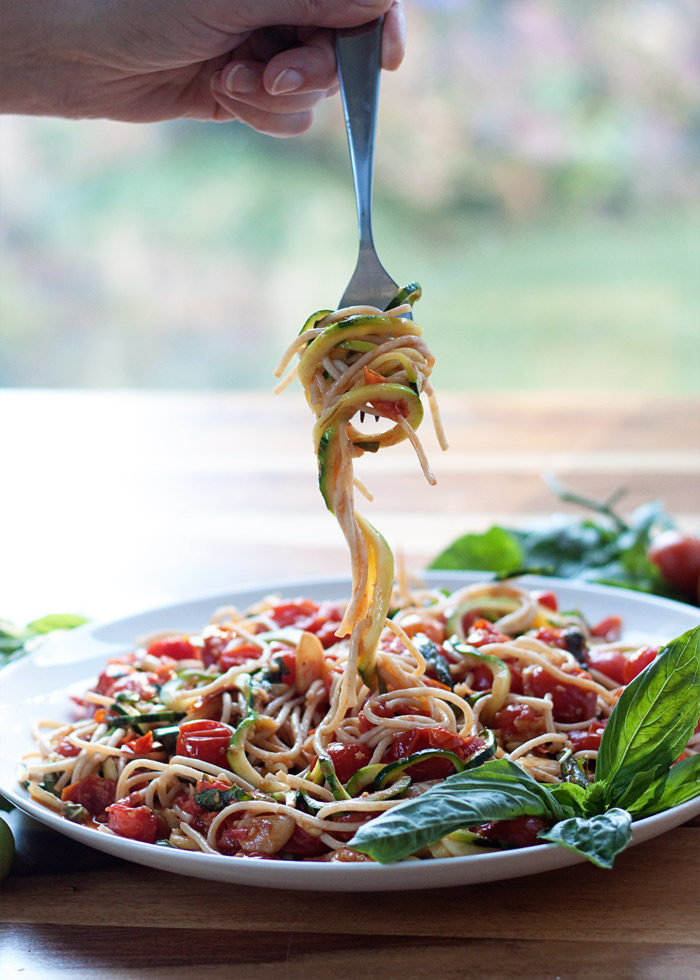 So there I was – obsessing over zoodles, cherry tomatoes, and that video and well, sometimes the dinner ideas just make themselves! Not literally, of course – but how cool would it be if dinner just made itself? I can’t be the only busy mom who has fantasized about this. Perhaps dancing spaghetti and self-stirring sauce would be a little disturbing, but so worth it. Oh so worth it. 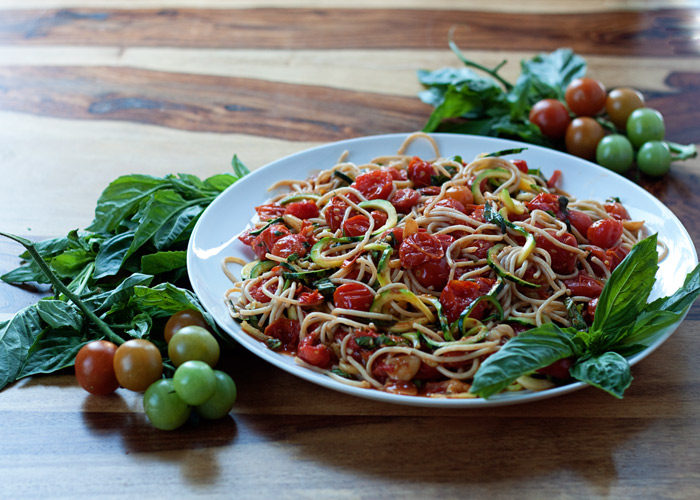 My points – and there are many of them, lord – is that this Zoodles & Noodles with Burst Cherry Tomato Sauce was born out of many current obsessions plus a very real need to have dinners that make themselves (I can’t move past this concept). But the fact is, this recipe kind of practically does make itself. (In other words: super easy). 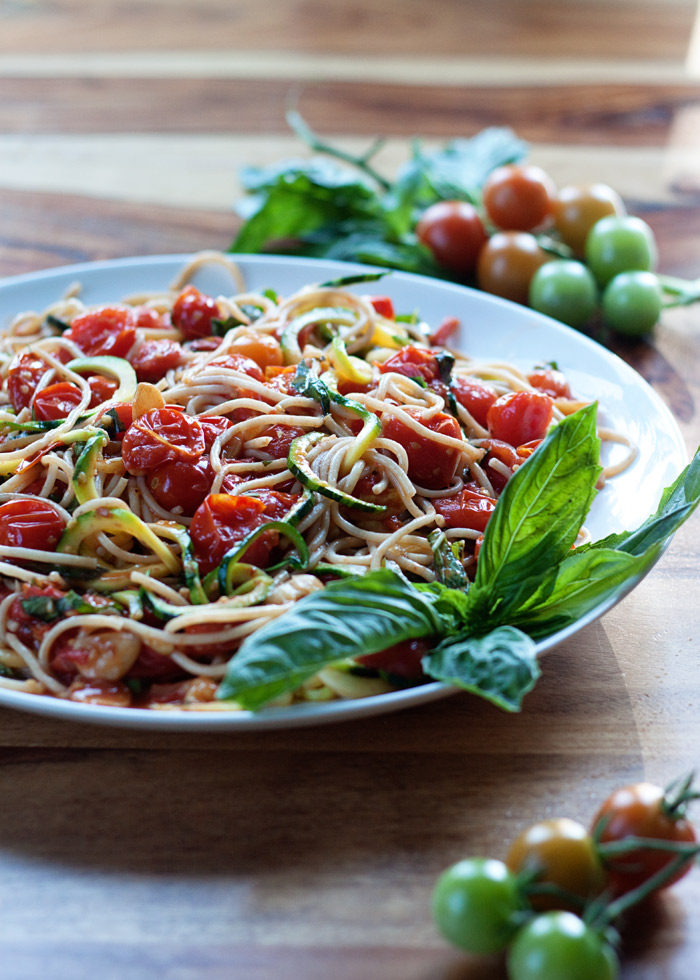 Note to my garden: Please oh please hang in there a few more weeks, will you? Because I can’t get enough of this super-simple dinner.

No ratings yet
This super-easy dinner makes the most of last-of-season summer produce. But don't be fooled - this dish can be enjoyed any time of year. Grocery store cherry tomatoes usually the most flavorful, even in the heart of winter!
Print Pin Rate

This post may contain affiliate links, which means if you click on a link and make a purchase, I may receive a portion of the proceeds. More about this here.
Comfort Food Dinner Entrees Fast (20 Minutes or Less) Healthy Kid Friendly Lunch Meal-Worthy Sides Pasta Quick & Easy Dinners Summer Vegetables