Was it only a mere six weeks ago that I pinned this absolutely brilliant idea for “pulled” spaghetti squash from the wonderful vegan blog The Blooming Platter? Surely it’s been longer, as I’ve enjoyed barbecue pulled spaghetti squash sandwiches several (several) times since then. An embarrassing amount of times, actually.

Yeah, I’ve decided it’s pretty much the most genius food idea ever. Not only is it genius because it works so well, but taking cooked spaghetti squash, tossing it in some good barbecue sauce, and serving it on a toasted bun is seriously, seriously delicious. Delicious and easy. Delicious and easy and brilliant.

I know I’ve already said it’s all those things, but if I don’t continue heaping praise, my burning jealousy for not coming up with the idea myself will shine through. 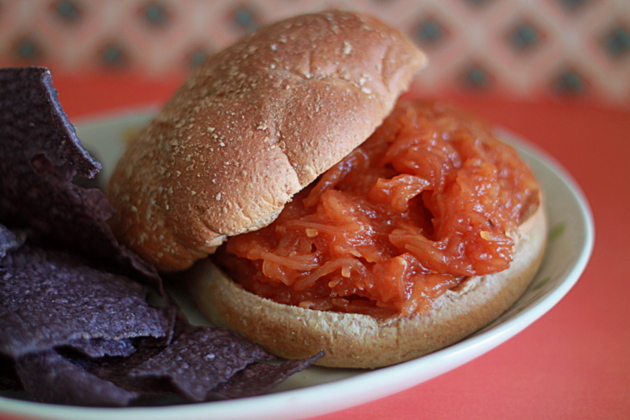 Yeah, it’s not my original idea, but I did create my own spin on it, and it’s become one of the most popular dual meals in our home.

See, most of the time, my recipes start out as vegetarian, and I add meat at the end for my resident carnivore. I call these “One Dish, Two Ways” because, well, that’s what they are.

But – stating the obvious here, I know – some dishes can’t really start out as vegetarian. Like steak. Or whole roasted chicken. Or, you know, pulled pork.

So, at times like this, when I whip up unabashed hunks of meat for my guy’s main dish, usually I’ll just be happy with a couple of veggie/carb sides, or a Morningstar riblet (surprisingly good) or a frozen veggie burger (several of which, again, are shockingly delicious).

But this time, this time, I get to have my own equally awesome (I would argue better, actually) main. 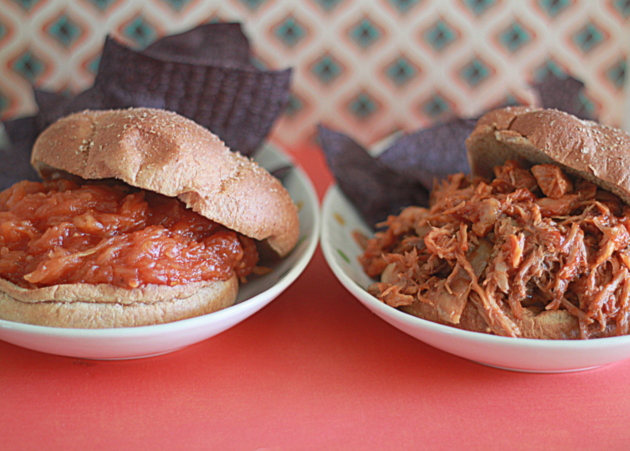 Even though I’m making two separate main dishes, these are both very, very easy to pull together. (Har har. “Pull.” Pulled squash and pulled pork. See what I did there? Sorry.)

Seriously though. Easy. Delicious. Try it. 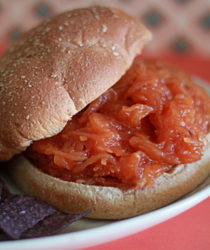 Adapted from About.com Southern Food I've written this recipe as we make it in our house, so the barbecue sauce is enough for the spaghetti squash AND the pulled pork sandwiches. So if you just make one or the other, you may have some sauce left over. If you make both versions like we do, be prepared for a lot of servings - like 10! The good news is, both versions freeze beautifully. We freeze individual portions in freezer bags and pull them out for quick, easy lunches and dinners. Inspired by The Blooming Platter of Vegan Recipes
This post may contain affiliate links, which means if you click on a link and make a purchase, I may receive a portion of the proceeds. More about this here.
Comfort Food Dinner Fall Freezer Friendly Lunch One Dish Two Ways Sandwiches Slow Cooker Slow Cooker Dinners Vegetarian+Carnivore Winter