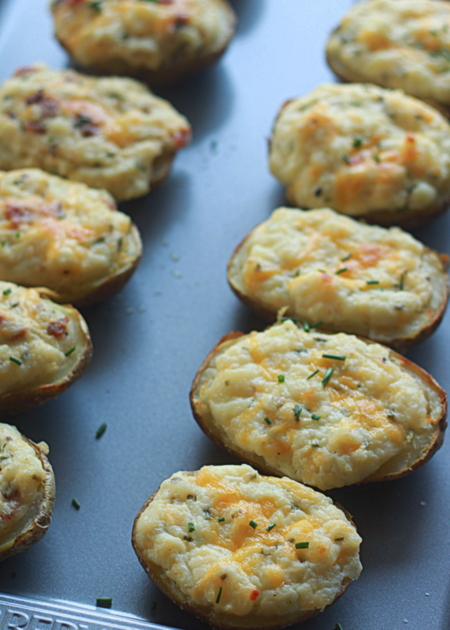 I have to admit I slipped this post just under the wire. Usually by Sunday, I’ve got the week’s posts all tidily lined up. This week, I don’t even really know why, I’ve struggled. I’ve been working on a pasta dish for awhile that I was finally ready to share, and so I made that for dinner Monday and snapped a few photos. They were horrible. I decided to whip up – and hopefully blog – these potatoes for last night’s dinner, once again trying to take a few decent pics before sitting the family down at the table to eat. Unfortunately, these photos really aren’t much better (I think I need to take my camera and lenses in for a good cleaning – surely it’s not the photographer?!)

But I am really, really excited about the recipe. It’s a keeper. 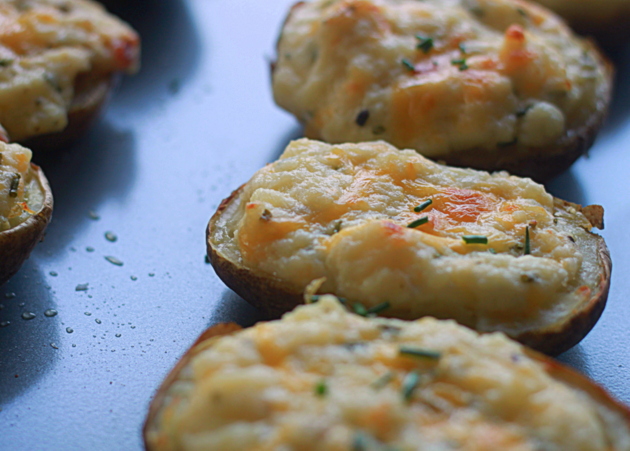 The best part is, right after thinking this up, my dad emailed asking me to bring a potato dish over on Sunday. Um, kismet, anyone? 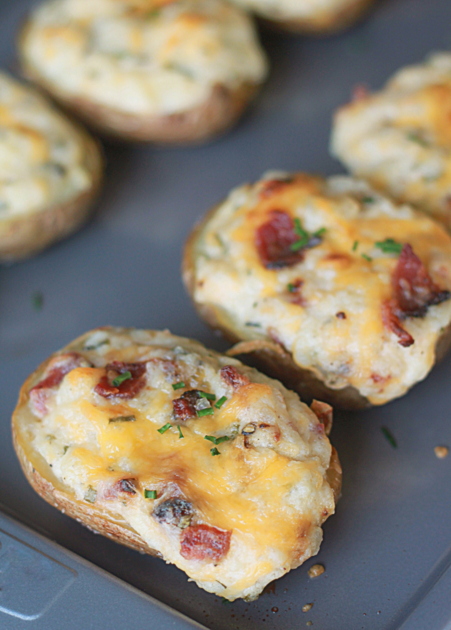 Done and done. Meat-eaters will get their bacon, and those who prefer to go meatless will fare equally tastily. 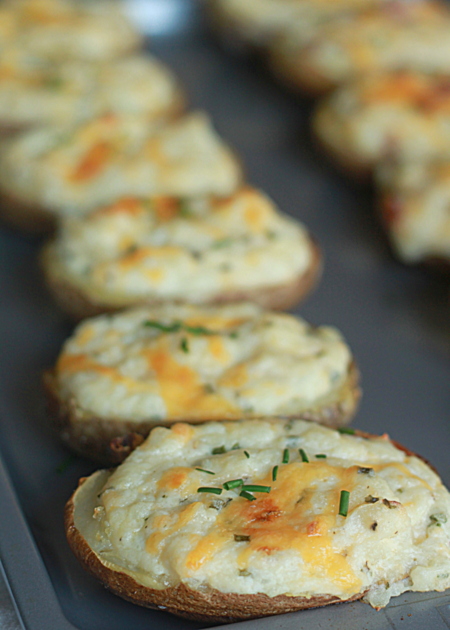 That was a terrible sentence. It sounds like something that should only be uttered at Medieval Times. Apologies. I guess I’m just off my blog game this week.

Anyway! A little more about these wonderful little halves of heaven and then I’ll let you be.

Greek yogurt replaces the sour cream often found in twice-baked potatoes. The bonus is that the yogurt gives them way more of a delicious tang than sour cream does, at least, I think so. Fresh chives, those wonderful harbingers of spring, lend their distinct yet mild oniony flavor (and a few extra snipped over the top don’t hurt, presentation-wise). A little butter and, okay, a lot of cheese just push these bad boys over the top.

Betcha can’t eat just one. I certainly didn’t. Oh, and a little serving suggestion: we ate these as our main for dinner alongside asparagus grilled with olive oil and coarse salt. It was absolute perfection. 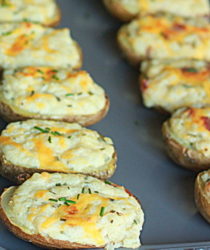 5 from 1 vote
Greek yogurt replaces the sour cream often found in twice-baked potatoes for a healthier spin on this delicious classic. Meat-eaters will be happy to have bacon added to theirs, but this recipe is plenty delicious without it.
Print Pin Rate
Yield: 12 halves

If adding optional bacon to 50% of the potatoes:

If adding optional bacon to all potatoes:

This post may contain affiliate links, which means if you click on a link and make a purchase, I may receive a portion of the proceeds. More about this here.
Christmas Comfort Food Dinner Kid Friendly Lunch Meal-Worthy Sides One Dish Two Ways Sides Summer Thanksgiving Vegetarian+Carnivore