Food (and drinks) in jars is pretty much the coolest concept ever. I mean, aside from aesthetics (they just look cute), it’s a highly convenient way to bake up cakes and pies – and make sangrias, even. They’re easy to assemble, tend to take up less room in the fridge, and are perfectly portable for gifts, parties, and lunches on the go. Even this awesome blogger wrote a cookbook all about it.

So, yeah, I’m a fan. And so when I found myself with a few stalks of rhubarb (yay spring!), I decided to take my classic go-to rhubarb crisp recipe and try baking it up in jars instead of one big pan.

Did I like rhubarb crisp in a jar? Does a bear … 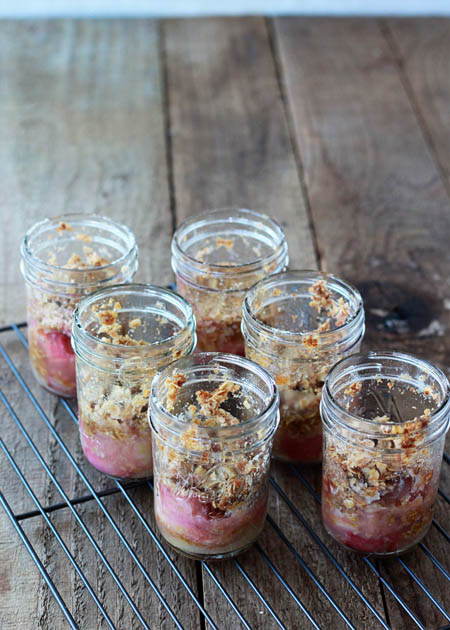 … like honey? (You thought I was going to say something gross, didn’t you? Psh. This is a food blog. I’m not going to bring that up here.)

(If you don’t know what kind of weird road I just went down, please just carry on. I’m going to continue talking about the crisp now.) 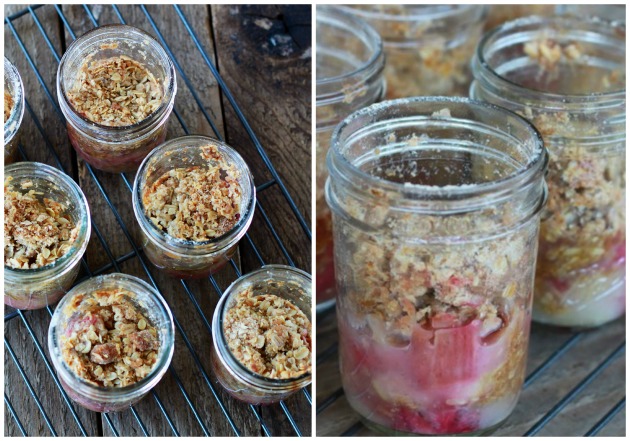 Rhubarb crisp! In a jar!

Gosh, it’s a really good thing I’m attending a food writing class this month, because I think I need some inspiration. Let me try again.

It’s just so cute and so awesome and so yummy!

Jars excite me to the point of incoherence, I guess.

Okay, so here’s the deal. This stuff is SO easy to make. You toss the rhubarb with some sugar and flour, then divide it between six jars. Whip up the crumbly, buttery topping, and throw that in the jar on top.

And bake. The rhubarb cooks down into sweet, tender, ruby bliss, and the oatmeal top gets nice and crunchy. This crisp does cook down quite a bit, so be warned. As far as I’m concerned, all the better. Because that way there’s a perfect spot for a dollop of whipped cream or a plop of ice cream.

Serve with long spoons and enjoy the pure awesomeness of food in jars. 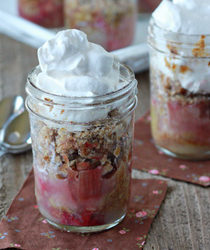 Rhubarb Crisp in a Jar

No ratings yet
Tangy, ruby-pink rhubarb with buttery-crisp topping - baked and served right in its own individual-serving-size jar.
Print Pin Rate
Yield: 6

This post may contain affiliate links, which means if you click on a link and make a purchase, I may receive a portion of the proceeds. More about this here.
Dessert Desserts Freezer Friendly Kid Friendly Spring

5 Comments on “Rhubarb Crisp in a Jar”