I’m all excited about this recipe. Which seems silly, because it’s totally something Aunt Edna would have lugged to the barbecue in her giant green Tupperware bowl, setting it next to the quivering Jell-O fruit salad. Or maybe that’s why I’m so excited about it. It feels so perfectly retro.

I’m also excited about it because I love it. And peas have not always been my thing, so. Yay! Yay for peas! 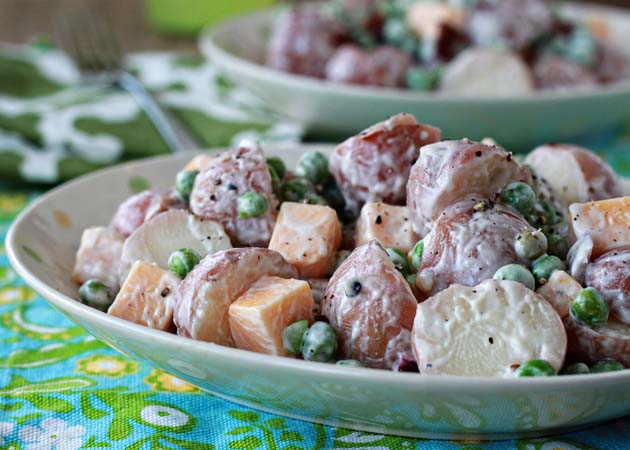 I think we all remember the pea salad with hunks of cheddar cheese that has graced family picnic and potluck tables for decades, right? Some just call it pea salad, others call it English pea salad. I called it something I was always a little wary of, thanks to several traumatic pea-related incidents in my youth. I’d roll those overcooked brownish orbs around my plate until I finally gave in, gagging as I placed a couple on the back of my tongue, gulping milk to swallow them like aspirin (I still think my brother is a genius for thinking up this method of “eating” peas).

Those canned, boiled-to-within-an-inch-of-their-existence peas were the antithesis of the gorgeous, crisp, sweet peas I’d snatch out of the garden and munch on happily. So confusing for a mere child.

Suffice it to say, it has taken me a long time to come around to peas, but the past few years, I’ve discovered that perfectly frozen peas – when prepared right (thawed or hardly cooked at all) – far more closely resemble their fresh-picked counterpart than mushy brown orbs. And then there are sugar snaps and snow peas and, of course, the one or two I am able to pluck out of my spring garden. All so wonderful. 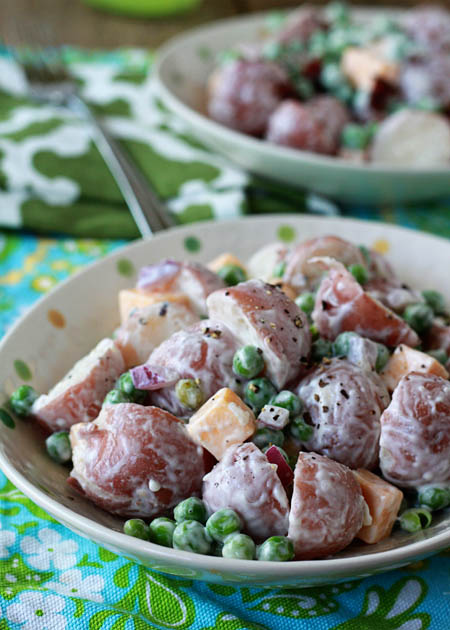 My toddler, who really isn’t keen on many vegetables, so far pretty reliably eats peas. So they’ve been on our table a lot lately, and I’ve been trying to think up a few more recipes that incorporate them. And I’ve also been wanting to come up with a new potato salad recipe, so the two sort of merged into this English pea/creamy baby red potato retro hybrid salad. 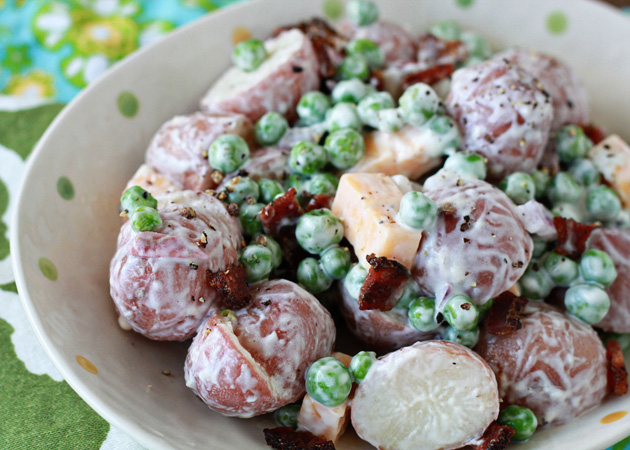 Sweet emerald peas, creamy cheddar, zingy red onions, and tender baby red potatoes tossed with light, lemony mayo sauce, and then served with crisp bacon bits for optional topping (or just stir bacon into half for the meat-eaters). So simple, so easy. And so retro – in all the very best, no-mushy-pea ways. 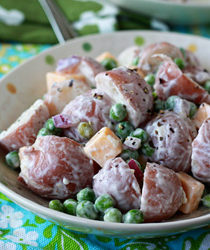 If making a half veggie/half meat-eater version, add:

3.2.1753
This post may contain affiliate links, which means if you click on a link and make a purchase, I may receive a portion of the proceeds. More about this here.
Dinner Lunch Meal-Worthy Sides One Dish Two Ways Salads Sides Spring Vegetarian+Carnivore