I know how it sounds. But I swear I didn’t mean it like that. For one, Rik was, and still is, absolutely beautiful. Her photos were, in fact, terrific. I swear, in my 16 year old mind, it was more like, “Rad dude! I get to whip out that little gem of wisdom!”

For these little numbers, I prefer to start with Yukon Golds – they don’t get all mushy, I don’t have to peel them, and they have such a buttery, wonderful flavor. But any potato will do. Really.

I cut them into wedges, toss them with olive oil, rosemary, and kosher salt, and roast them in the oven. Sound easy? That’s cuz it is. This is pretty simple, straightforward stuff. You take a picture of a potato, you get a potato! 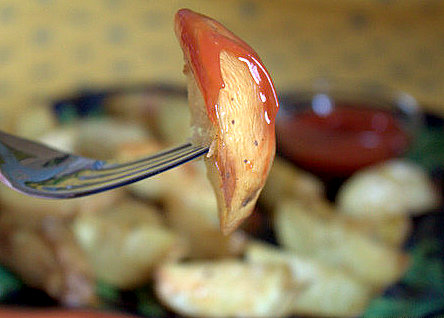 * Names have been changed to protect the rightfully insulted. 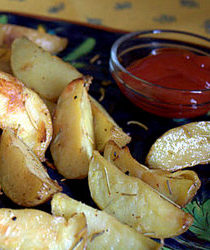 No ratings yet
These oven-roasted potatoes tossed with rosemary and salt are about as easy as it gets!
Print Pin Rate
Yield: 4 servings

This post may contain affiliate links, which means if you click on a link and make a purchase, I may receive a portion of the proceeds. More about this here.
Dinner Kid Friendly Lunch Sides Spring

6 Comments on “Oven-Roasted Potatoes with Rosemary”