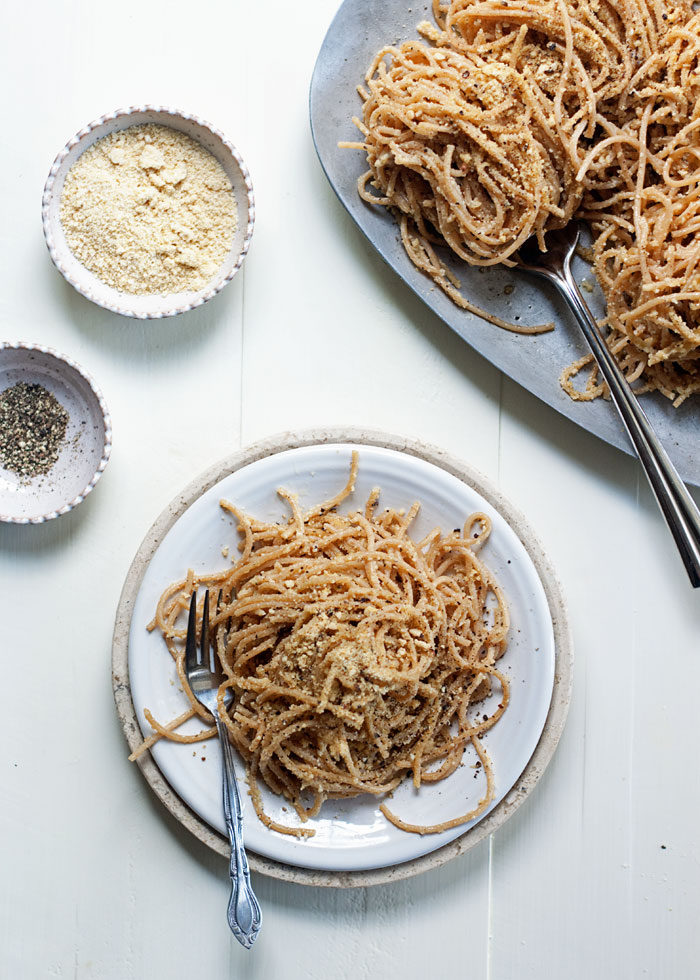 Cacio e Pepe – “cheese and pepper,” literally translated – is kind of a Stonehenge of recipes. In that it’s sacred. Revered. Hallowed. Meant to be untouched.

Today I’m revealing my inner rebel and not only seriously messing with the recipe, but I’m also calling it Vegan Cacio e Pepe.

I know, I know … besides the fact that it’s sacred, there’s also this: If Cacio e Pepe doesn’t have cheese in it, it’s not really Cacio e Pepe.

But here’s the deal. I used to love me some Cacio e Pepe (and its variations). Something fierce. Then I went all dairy free and whatnot, and here I am, wanting Cacio e Pepe and not being able to have it. Bad things, good people.

So I thought I’d try something that just might satisfy my craving. I thought, what if I tossed a whole slew of cashew parm into some pasta and cracked a bunch of black pepper over the top? Would it satisfy my lust for Cacio e Pepe?! 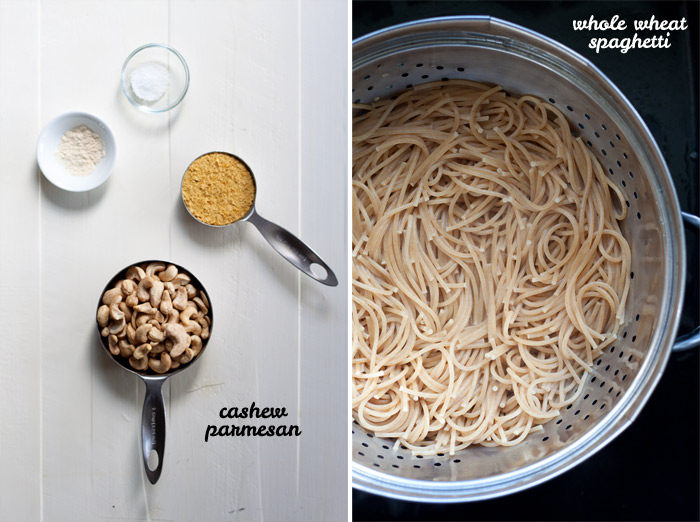 The first time I took a bite, my eyes went wide. Good wide. “DAMN, that’s AWESOME” wide. Seriously, this stuff is so, so delicious and tastes shockingly close to the authentic stuff. But without a speck of cheese! For real!

I think it’s worthy of being called the real thing (well, preceded by the word “vegan,” of course) even if it really isn’t. Lord knows I’m more than happy sticking with this version and never going back to the original. 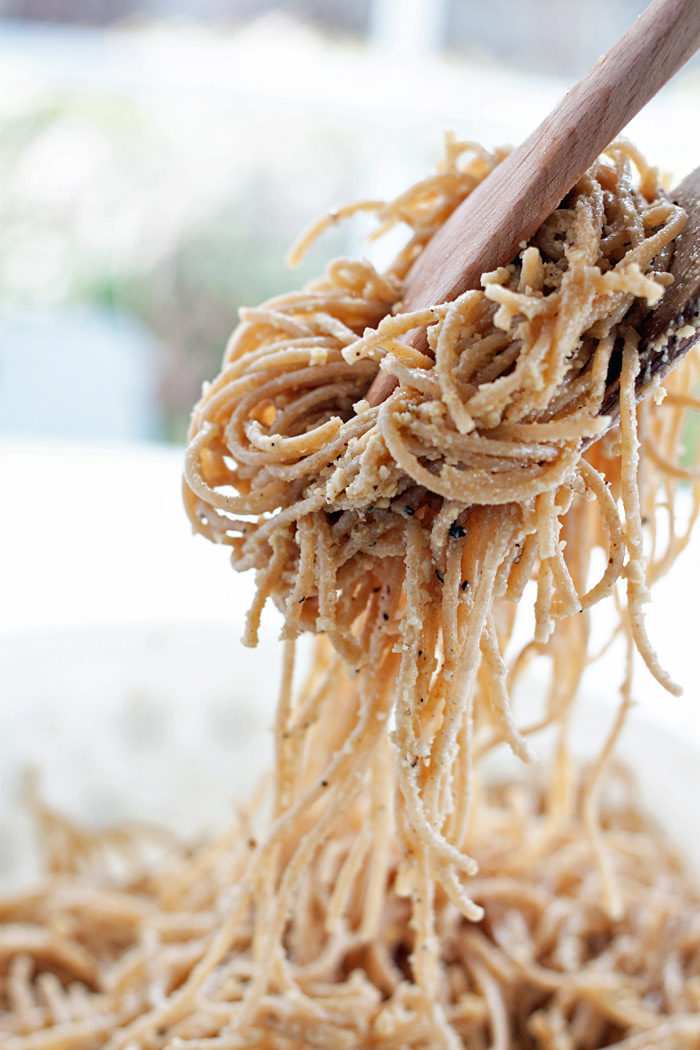 If you’ve tried cashew parmesan, you already know it’s kind of magical stuff. Basically, you grind cashews with nutritional yeast, salt, and a little garlic powder if you like. The taste comes seriously close to the real thing, and it’s incredible on everything. Soup. Pizza. And oh mylanta, popcorn.

And mixed straight in with pasta and black pepper, too. 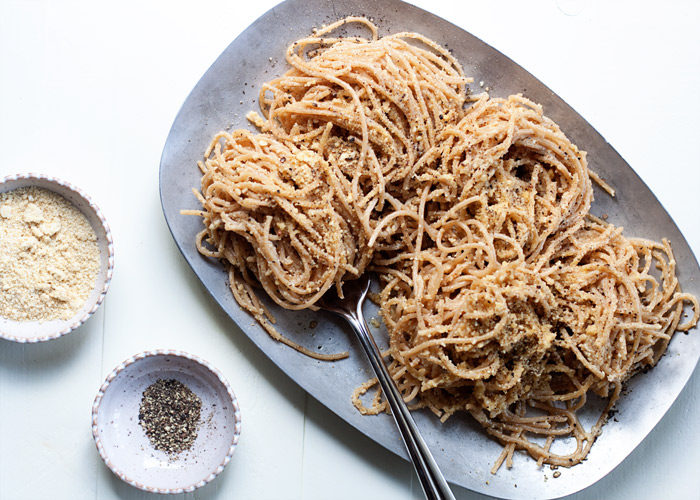 For this recipe, I use whole wheat pasta. It also works well with angel hair pasta and, I’d imagine, gluten-free brown rice pasta (I haven’t tried it with gluten-free pasta yet, but I will report back as soon as I have. An excuse to commit blasphemy yet again?! I’m there!) 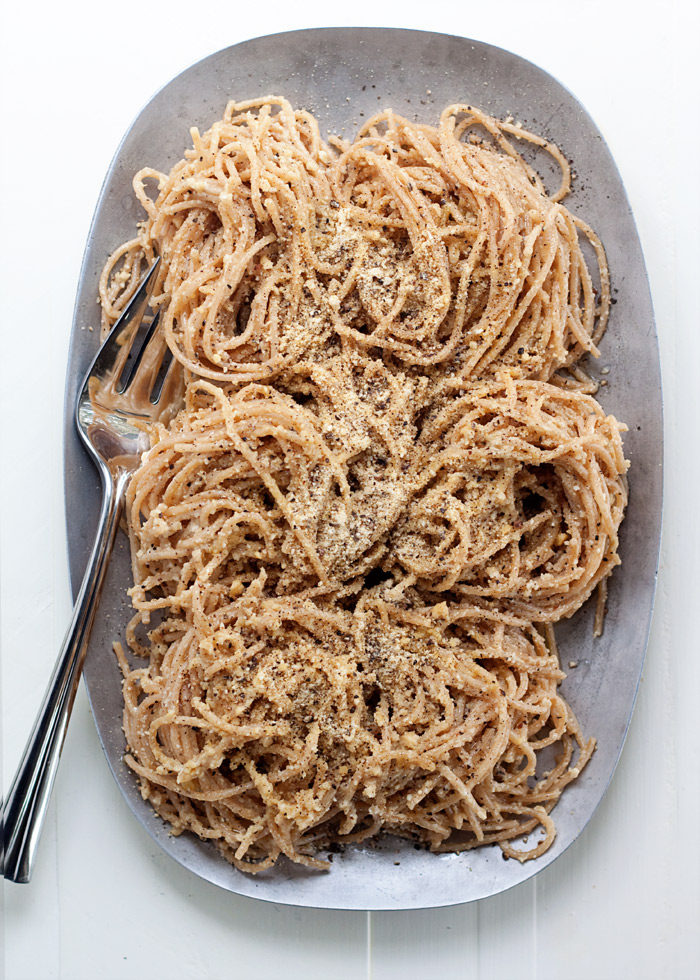 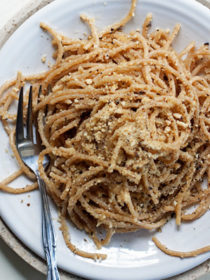 No ratings yet
With cashew parmesan in place of the pecorino romano, this vegan version of the cheese-and-black-pepper pasta staple comes remarkably close to the real thing. Only 8 ingredients (including olive oil, salt, and pepper) and done in 20 minutes!
Print Pin Rate

For the cashew parmesan:

For the Vegan Cacio e Pepe:

Use gluten-free brown rice pasta.
This post may contain affiliate links, which means if you click on a link and make a purchase, I may receive a portion of the proceeds. More about this here.
Comfort Food Dinner Entrees Fast (20 Minutes or Less) Healthy Kid Friendly Lunch Meal-Worthy Sides Pantry Pasta Quick & Easy Dinners