I’ve been blogging here at Kitchen Treaty since March, pumping out so many recipes that I accidentally just typed “pumpkin” instead of “pumping” (seriously). I’ve focused so much on content for these past seven months that I realized it might be nice to just take a step back and just do some splainin’, Lucille Ball style.

Kitchen Treaty might be a new food blog, but I’m not a new blogger. My blogging career started in September 2009 with a blog named The Hazel Bloom. When I started out, I blogged about pretty much everything that has to do with keeping a home. I was in full-on nesting mode when I started it, and my tagline was simply “Domesticity rules.” Gardening, home projects, thrift store treasure upcycling, and, of course, recipes. 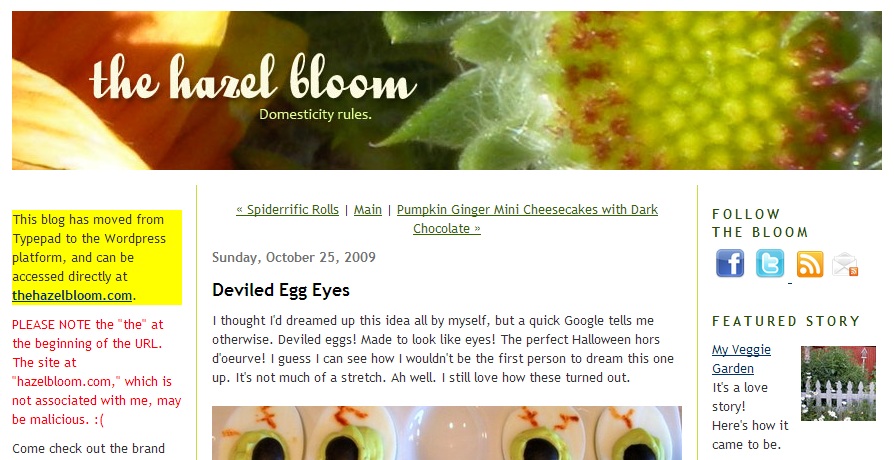 About a year into my blogging stint at The Hazel Bloom, probably nine out of 10 (or more) of my posts were about food. I’d evolved into a food blogger, and The Hazel Bloom was becoming a food blog. But then I realized two things: 1) With no particular theme, there’s really nothing to set my blog apart from the (literally) millions upon millions of other food blogs that are out there, and 2) “The Hazel Bloom,” originally derived from my love for green flowers and my adoration for the name “Hazel,” also sounds like something that happens to a loaf of bread if it sits out too long.

Mold isn’t really an image I want to conjure up when I’m trying to entice readers with delicious recipes. 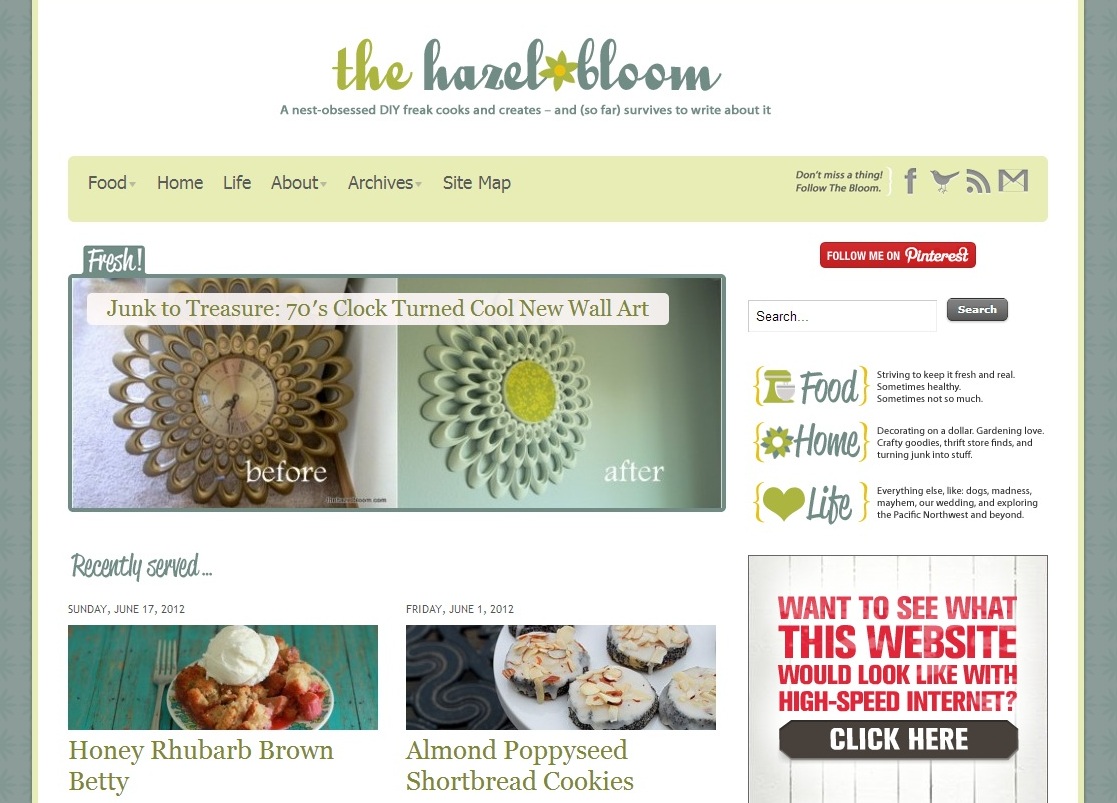 So, in about 2010, as I was publishing a “One Dish Two Ways” type of recipe (I called it “adaptetarian” at the time, which is a term I still go back and forth on), I decided to launch a new food blog, with a new name, focusing on our “vegetarians and carnivores living together” way of life.

But then life got in the way as it tends to do. Job changes, rough pregnancies, hackers … and as I dreamed of my new blog, I went through a few iterations and names. Gruntilicious was one, as my guy and I have sort of a “grunts up” thing when he really digs food, and I’d run with that on The Hazel Bloom a bit.  But it was more cutesy than explanatory. Nix.

Franks & Beans was another, and probably my favorite alternate. I reserved franksandbeansblog.com and started working on it, then one quiet morning my husband attempted to browse to the site in progress, leaving the “blog” part off of the URL and ending up at a website far more, um, eXXXciting. “OH MY GOD!” was not something I wanted my readers to scream when attempting to visit my site, so it was back to square one.

We finally settled on Kitchen Treaty in early 2012. It had taken me so long to get the site up and running that I sat down for a few hours and slapped together a design, launched the site, and just immediately started focusing  on the content. 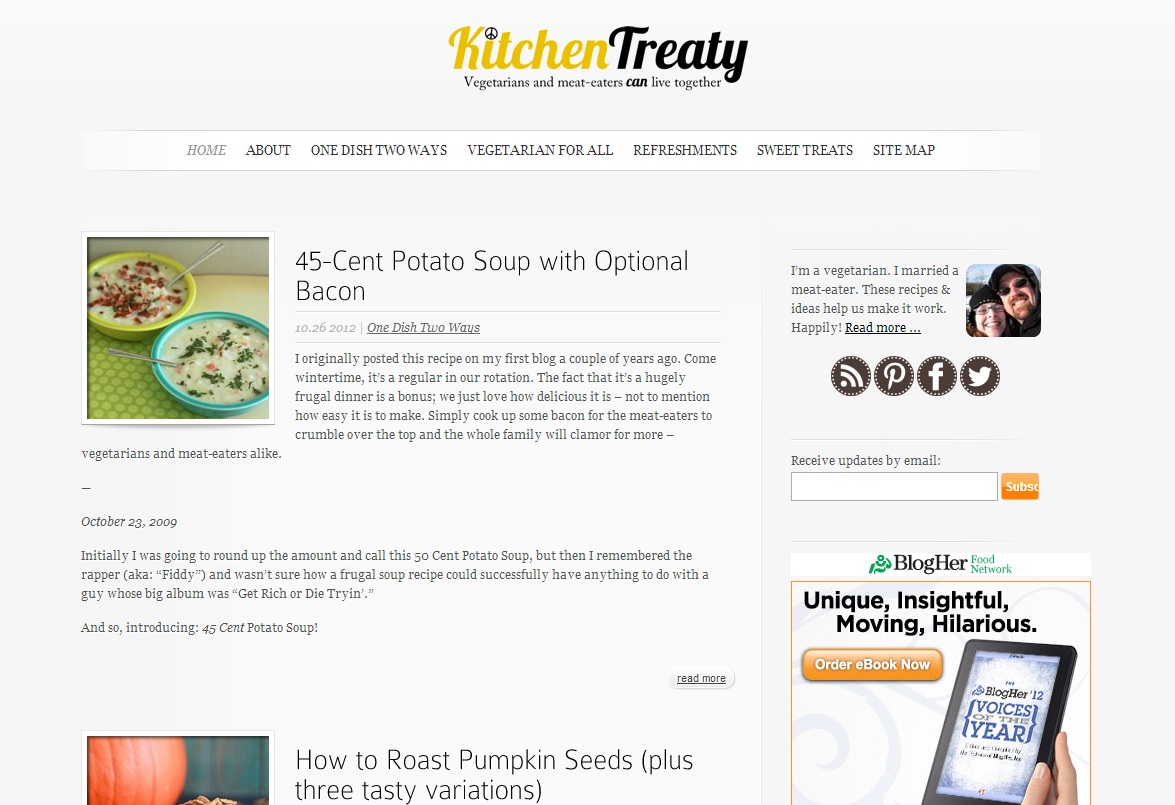 I can do a bit of hacky design and some coding, but with a baby to look after, time is not on my side. So I hired a designer to whip Kitchen Treaty into ship-shape, and spent most of September working with said designer on the brand-new Kitchen Treaty. Unfortunately, that project was a disaster, and I had to scrap it.

Blogging can be quite the roller coaster. This is a fact.

Meanwhile, there’s the matter of the hundreds of recipes and posts that are just sort of languishing on my old blog. If you’ve been reading Kitchen Treaty somewhat regularly, you’ve probably noticed I like to bubble up my favorite old recipes from The Hazel Bloom and feature them here now and then. I’ve been toying with what to do with all the recipes and posts over there, and here’s what I finally decided on: I’m going to move the posts from The Hazel Bloom over to Kitchen Treaty, and eventually shut The Hazel Bloom down. I’ll republish these archived posts a few at a time, refreshing the recipe and photos as necessary, but keeping the original date and any comments that were made on the post. And when I’ve moved a batch of recipes over, I’ll mention them in a new post so that you know they’re there.

So here on Kitchen Treaty, the archive is going to grow, and it’ll go back to 2009, even though this blog really launched in 2012. A little weird, I know.

Design-wise, in between new posts and recipes, you may notice a few visual tweaks here and there as I slowly work on making Kitchen Treaty more user-friendly and, hopefully, a lot nicer to look at. Here’s a quick look at the new logo, which I must say I’m pretty excited about.

So that’s what’s been going on around here. Whew!

There’s just one more thing I’d like to say. Despite all the work, the roller coaster, dealing with hackers, hiring the wrong people, and the fact that people comment and complain that my sangria made them too drunk or the buttercream frosting was too sweet (two of my favorite comments, actually), I love, love, love that I can call myself a food blogger. And I’m so excited to say that Kitchen Treaty is my job.

Thank you so much for reading. Here’s to creating peace in the kitchen!

78 Comments on “So What’s Going On Around Here, Anyway? An Explanation”