In the words of Staind, “It’s Been Awhile!” Yep, it’s been awhile since I’ve posted a One Dish Two Ways recipe (one recipe that can be made vegetarian/vegan AND meaty for multi-diet families).

I guess that’s partially because I’ve been perfecting this one for like three months now. (One side benefit to having to make this over and over until it’s just right? Lots and lots of crispy baked gnocchi for dinner!) 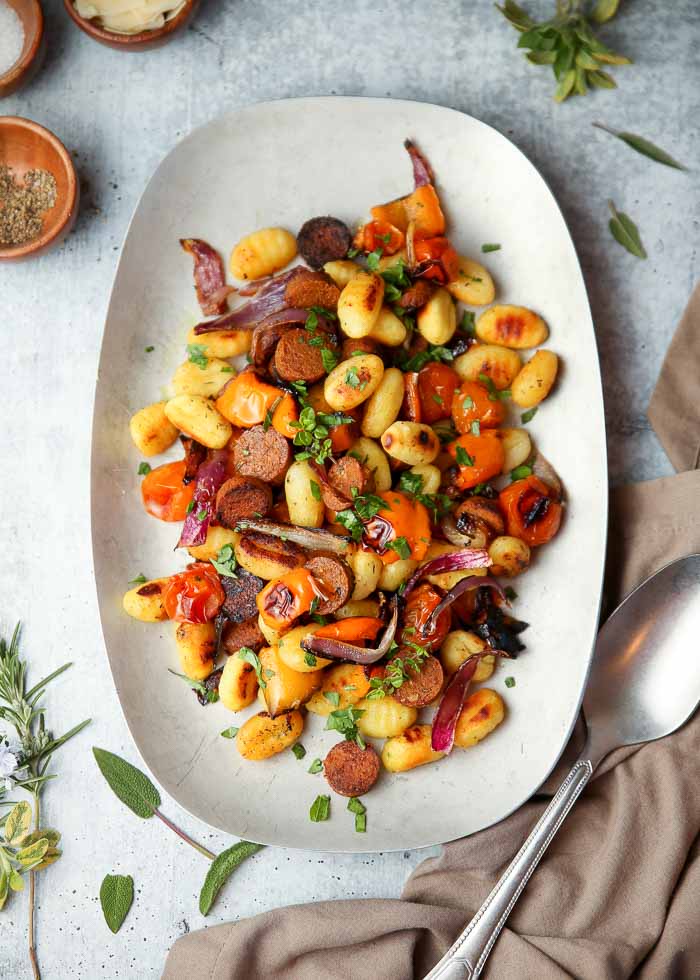 Crispy Sheet Pan Gnocchi with Veggies & Sausage hits all the right notes for me, not only because it’s delicious with a great balance of veggies, protein, carbs, and fat all on one glorious sheet pan, but also because it’s really REALLY easy to prepare. 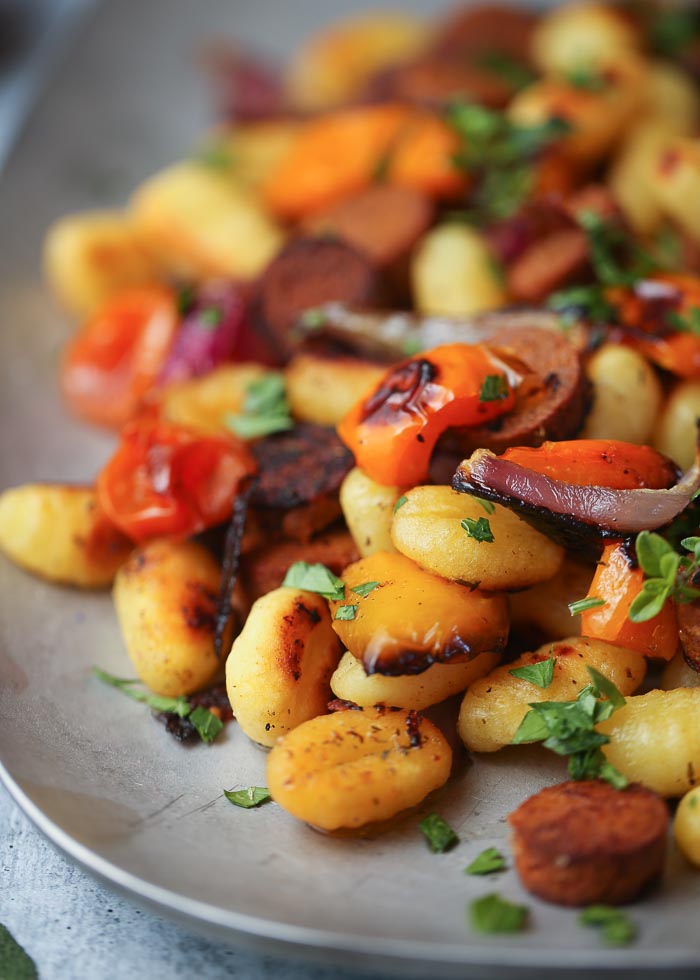 Yes! I’ve gotta admit, the fact that I could cook gnocchi on a sheet pan was a revelation. It’s so easy!

Not only that, but it results in a scrumptious crispy-golden-on-the-outside situation that has made me a sheet pan gnocchi addict for reals. 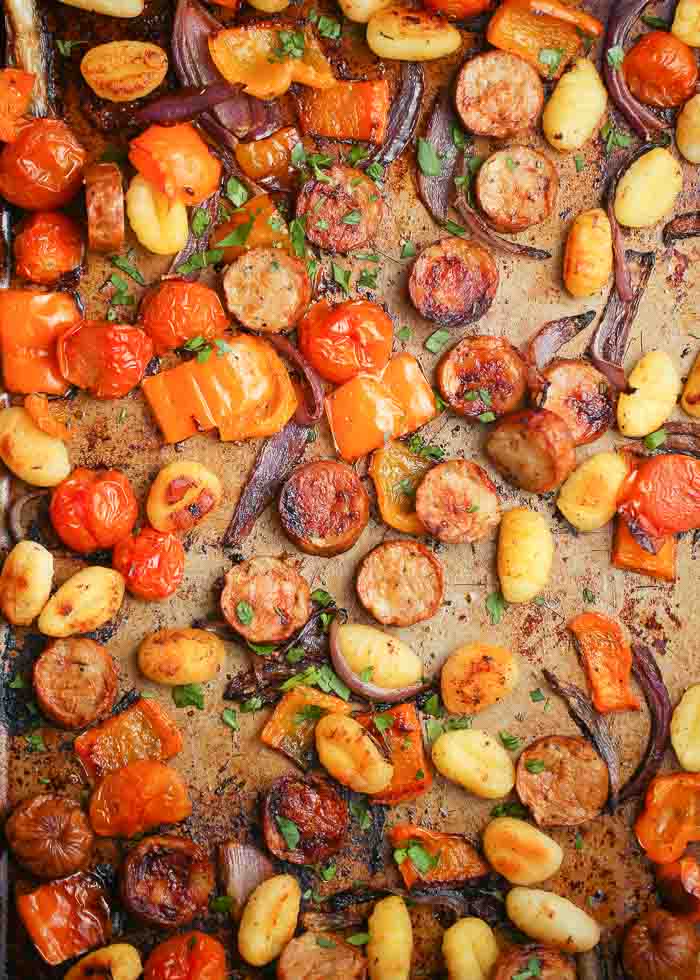 This sheet pan gnocchi recipe was inspired by a recipe I found on the Green Plate Club back in January. That one had gnocchi, butternut squash, and sage, and it was so good, I just had to find more ways to incorporate sheet pan gnocchi into my life.

For this recipe, we’ve got gnocchi, sausage (vegan or meaty), bell peppers, onion, cherry tomatoes, and some seasonings.

To keep dietary worlds divided, I simply break out two large sheet pans, then start chopping. Chop up the onion and divide it between the sheet pans. Then the bell peppers. Divide the tomatoes and the gnocchi between the two. Then cut up the veggie sausage, add it to one pan, and do the same with the meaty sausage on the other.

Finally, drizzle each side with olive oil and sprinkle on the salt, pepper, garlic powder, and thyme. Then toss it all to distribute everything, and then spread it all evenly on the sheet pan.

Ready for the oven! 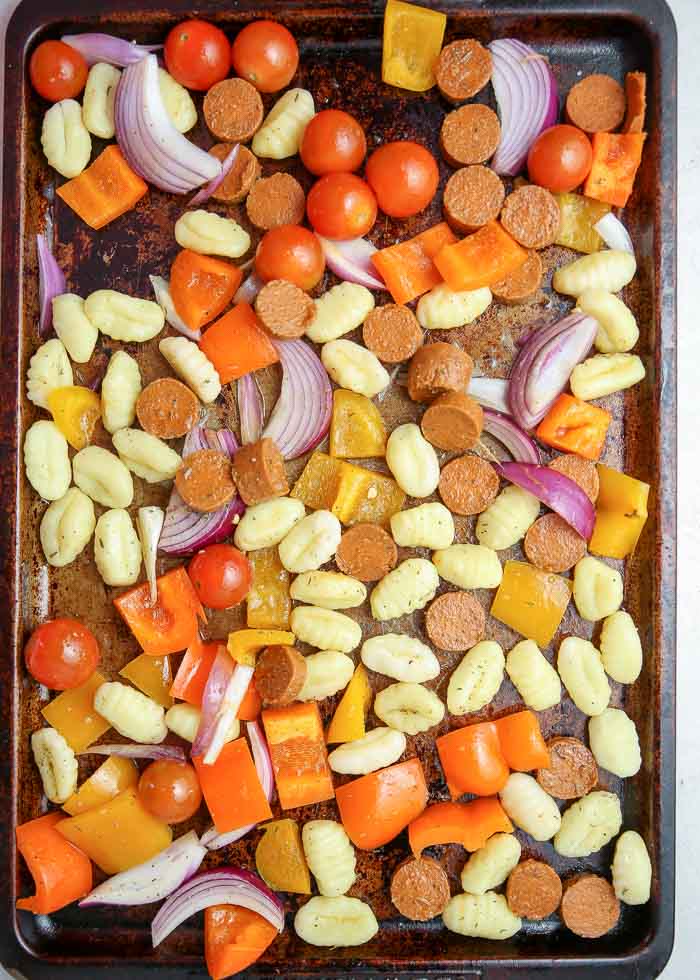 Bake until golden and bubbling and perfect, then sprinkle on some fresh parsley or other herbs, maybe drizzle a little extra olive oil if that’s your jam, and serve. 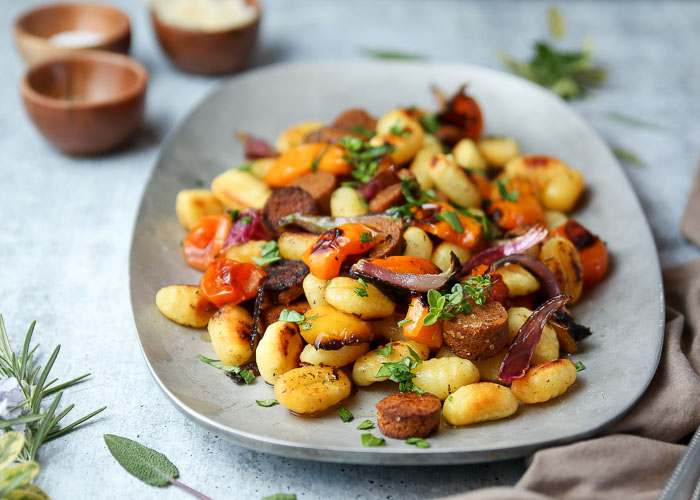 You can serve with parmesan cheese for the non-vegans, or without – it’s great either way.

Oh, and something to check beforehand: Make sure your oven is large enough to accommodate both sheet pans at once! 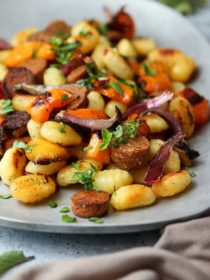 No ratings yet
Assembled on two sheet pans to separate the meaty from the meatless, this easy-to-make dinner boasts veggies, sausage/vegan sausage, and gnocchi roasted to golden perfection.
Print Pin Rate
Yield: 4 servings

"Sausage" for the vegan/vegetarian side:

Sausage for the meaty side:

Make sure the gnocchi you're choosing is vegan (some has eggs or dairy). I like DeCecco Potato Gnocchi.

If you only have one kind of sausage:

If you'd like to leave the sausage out completely, go for it! This one is still plenty delicious with just the gnocchi and veggies. I'd stick with two sheet pans though just to make sure everything has enough space to become golden brown and delicious.
This post may contain affiliate links, which means if you click on a link and make a purchase, I may receive a portion of the proceeds. More about this here.
Comfort Food Dinner Entrees Meal One Dish Two Ways Pasta Recipes The Multivore Life Vegan Dinners Vegan+Carnivore Vegetables Vegetarian+Carnivore

One Comment on “Crispy Sheet Pan Gnocchi with Veggies & Sausage (Vegan or Meaty!)”