When life gives you tomatillos … make this vegetarian chili verde!

Okay, so I absolutely adore this recipe. For one, I’m just really stinkin’ proud of it. I received a pound of tomatillos in my CSA box (yeah, I know a lot of my recipes lately start with my CSA box). And I was totally going to whip up some salsa verde and that was going to be that.

But then my mind turned to other options. And because I’m a chili fiend, it wasn’t long before I decided to try my hand at chile verde, which I had never made before. 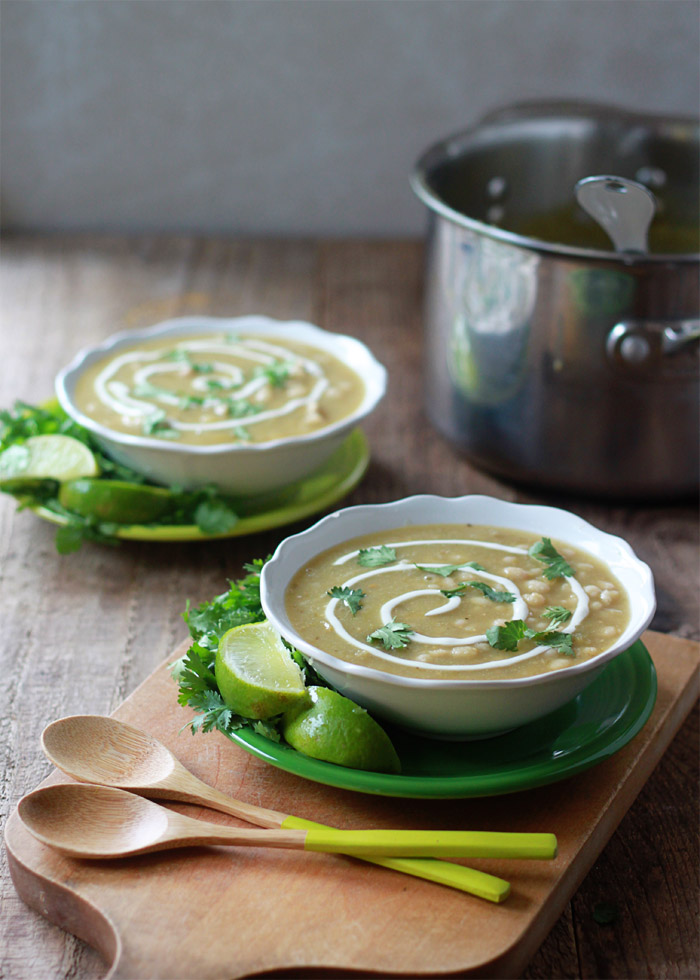 I just kind of winged this recipe the first time I made it, so I was sort of shocked when I freaking absolutely positively loved it. Because usually recipe creation doesn’t go that way. It’s trial and error and less of this and more of that and what-was-I-thinking. But this one was just pure deliciousness the very first time. I’ve made it more than once, of course, just to be sure – and yep, it’s, like, a really great recipe. I know I’m totally bragging and it’s obnoxious and I’m sorry but I’m proud, like, run-on-sentence and totally talk like a Valley Girl proud! 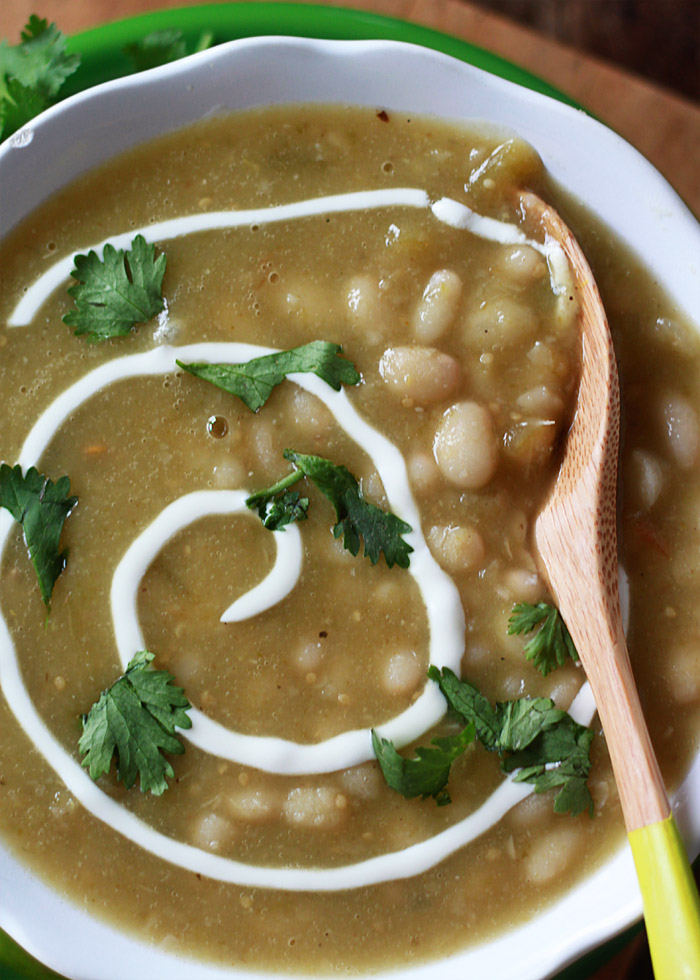 So here’s the scoop. I took a cue from Giada’s vegetarian chili verde recipe by starting with a roux-thickened soup, though the similarities to her recipe pretty much stop there. Hers is packed full of veggies and looks pretty dang phenomenal, but mine is simpler (it started out that way primarily because I didn’t feel like going to the grocery store – and then it stayed that way because I loved it).

It takes a two-pronged approach to make, but it comes together so easily, promise. While the base of the soup – olive oil, veggie broth, onion, garlic, spices – bubbles away, the tomatillos and peppers roast up in the oven. 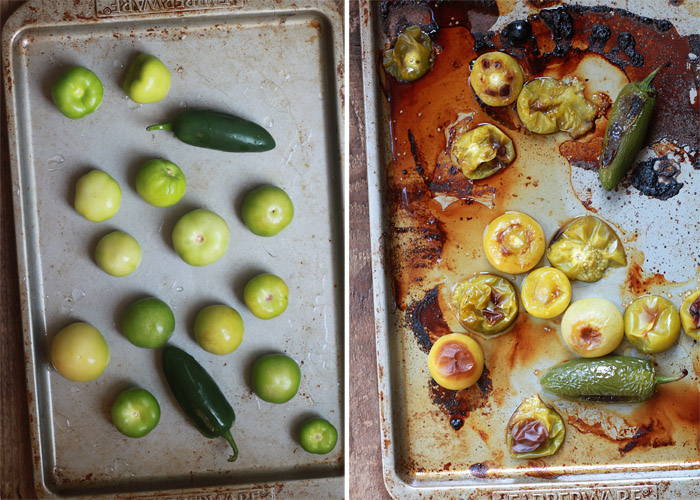 (Don’t be like me – use parchment paper or foil for easier clean-up!)

So, see all that roasty goodness up there? Peel the peppers then add everything to the soup pot, juices and all, and puree it all together with an immersion blender.

Hold up! Can we just talk about immersion blenders for a moment? If you don’t have one in your life, allow me to be pushy for a moment and say this: YOU NEED ONE! For everything from soups to sauces to super-smooth pizza sauce (there’s always one person who’s opposed to chunks!) – these things are one of the best bangs for your buck, small-appliance-wise.  When you can just whip that soup into submission right in the pot, the clean-up – and therefore life – is so much easier. And then you can focus on the eating! 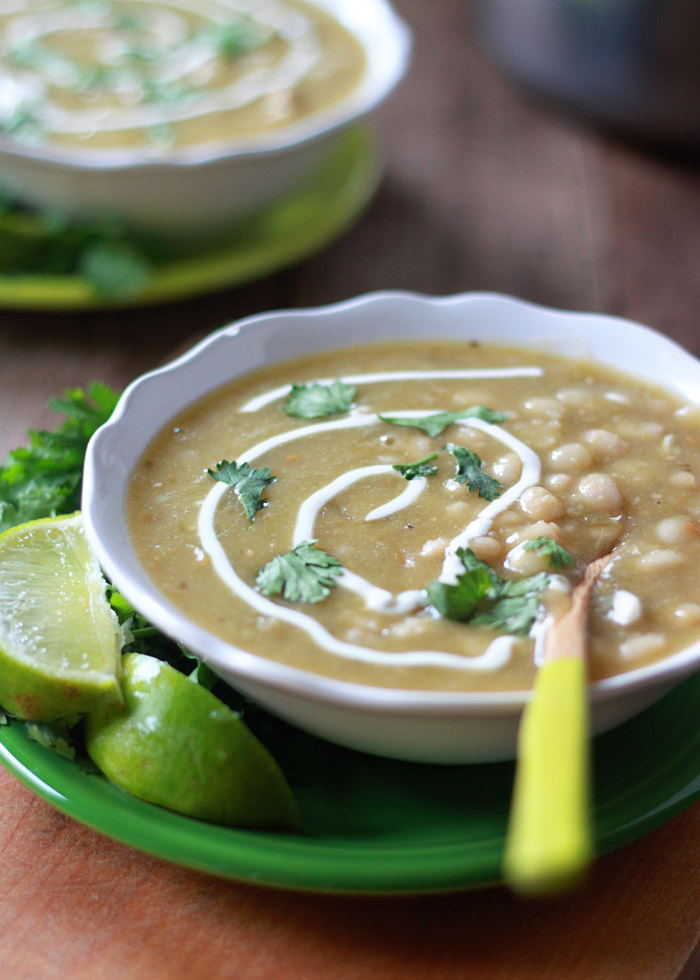 Anyway! After pureeing the dickens out of it all, now it’s just a matter of adding some hearty white beans and then topping with a couple little extras, if you like. You can also add some shredded chicken to all or half if the meat-inclined are interested. Because we’re all about multivorous living around here. 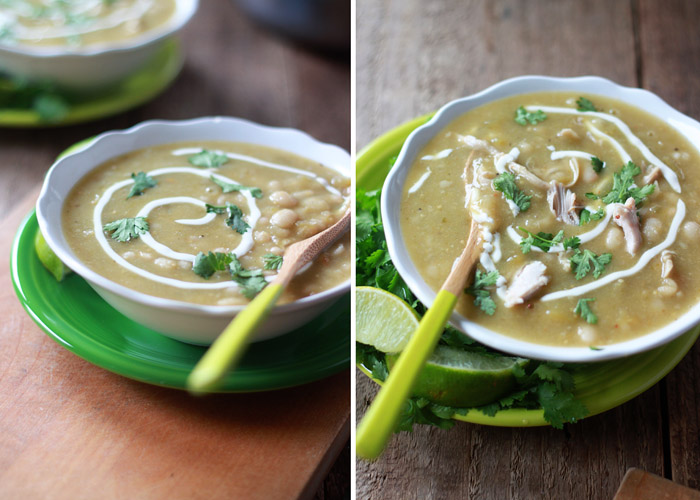 Top with a generous squeeze of lime and lots of cilantro, if you’re up for it. And a squeeze of Greek yogurt or sour cream to cool a bit of the heat, if you desire. (I got these new squeeze bottles and felt all fancy squeezing the sour cream on in a spiral, even though they’re a mess. Food art: not my forte.)

The moral of the story: Got tomatillos? Make this! 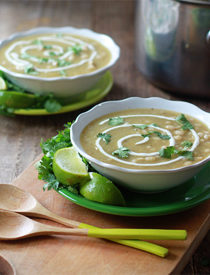 4 from 2 votes
A thick and hearty vegetarian chili verde with a good kick of heat and the zingy tang of fresh-roasted tomatillos. It's plenty satisfying on its own, but you can also add cooked and shredded chicken (we use store-bought rotisserie chicken) for the carnivores.
Print Pin Rate
Yield: 4 -6 servings

If adding chicken to half:

If adding chicken to all:

* I tend to call for low-sodium veggie broth because it allows you to better control the salt content of your soup. But if you only have plain ol' veg broth, it's cool - just start out with a little less salt to start with then adjust to taste at the end of the process.
This post may contain affiliate links, which means if you click on a link and make a purchase, I may receive a portion of the proceeds. More about this here.
Chili Comfort Food Dinner Entrees Fall Lunch One Dish Two Ways Protein Powered Soups and Stews St. Patrick's Day Summer Vegan+Carnivore Vegetarian+Carnivore